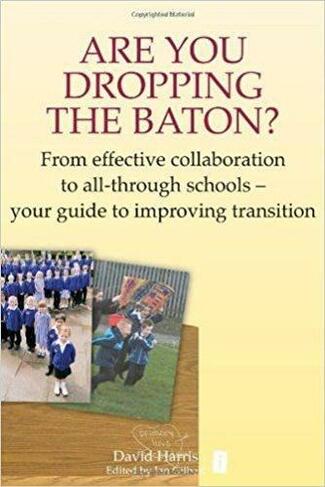 Are You Dropping the Baton?: How Schools can Work Together to get Transition Right

Foreword by Gervase Phinn. It advocates several different approaches to facilitating this from soft federations between schools to the all-through 3-18 solution. This practical, pragmatic text places young people at the centre of their learning and provides complete guidance on all that is needed to arrange activities between schools. The wide range of activities catered for includes: - Short term 'one off' activities for primary and secondary pupils to carry out together - Longer projects that allow primary and secondary pupils to develop working relationships - Activities which place the pupil in the role of educator for others - Projects which are ideal for collaboration between teachers with very different experiences and skills - Development tasks for leaders of schools who are keen to develop closer relationships with each other - Guidance on different routes of collaboration Dave Harris found that working with unfamiliar age groups challenged his truths of education and reminded him why he first joined the teaching profession. The more you work with other phases of education the more clearly you view the differences and the more you understand why so many pupils suffer at transition between schools. Are You Dropping The Baton? gives teachers practical help to remove the boundaries to progress and help rekindle their passion for teaching.

Ian Gilbert is an educational speaker, award-winning writer and editor, innovator, entrepreneur and a man who the IB World magazine named as one of its top fifteen 'educational visionaries'. In 1994 he established the unique educational network Independent Thinking, whose Associates and pioneering books have influenced teachers, school leaders and young people all across the globe. Ian has a unique perspective on education and society, having lived and worked in the UK, the Middle East, South America, Asia and, now, the Netherlands.Dave Harris worked for over 20 years in school leadership, including 12 as a school principal across both primary and secondary phases. During this time he developed a reputation for innovative thinking and practice. Since retiring from working in schools he now puts his ideas into practice as Managing Director of Independent Thinking Ltd.John West-Burnham is an independent writer, teacher, and consultant in education leadership. John is the author, co-author, or editor of 27 books including Rethinking Educational Leadership and Leadership Dialogues and he has worked in 27 countries. He is a director of three academy trusts, a trustee of two educational charities, and is an honorary professor in the Institute of Education, University of Worcester.Professor Gervase Phinn taught in a range of schools for fourteen years before becoming an education adviser and school inspector. He is now a freelance lecturer, broadcaster, writer, and a consultant for the Open University. He is President of The School Library Association.