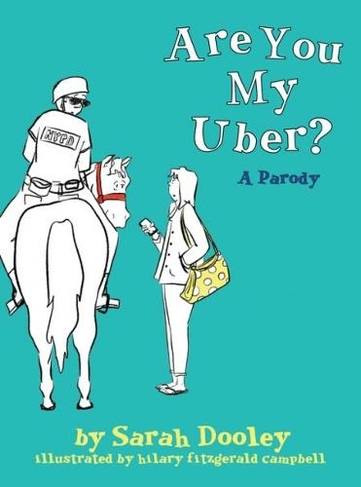 Are You My Uber?: A Parody

We've all been there. It's late. Maybe you've had a few drinks. You've decided against taking the subway and instead, to call an Uber. The app says it has arrived, but . . . where is it? Where is your Uber? Are You My Uber? is a direct parody of the 1960 P.D. Eastman children's book Are You My Mother? The scene is set as a young woman steps off the midnight bus at Port Authority. Her name? Unknown. Her goal? To find her Uber, an elusive Ford Taurus. Lost and alone in a new city, she steels herself and begins by passing right by the very object of her search. Hilarity ensues: the girl proceeds to knock at the doors of an off-duty cab, a hearse, a halal cart, and other vehicles increasing in their absurdity, willing to try anything to find her Uber. Paired with illustrations by Hilary Fitgerald Campbell, co-illustrator of Feminist Fight Club, Sarah Dooley's hilarious imagined story is parody at its best, offering readers humour and solidarity -- maybe even a little social commentary -- through an increasingly universal experience. 16 Illustrations, color

Sarah Dooley is a comedian and musician living in Brooklyn. In 2011 her play My Play won the Avant Garde Arts Festival. Her feature film The Goode Family is currently in development, and her debut album Stupid Things was featured on NPR and hit #16 on the iTunes pop charts. Her favourite kind of salad is macaroni. One time she thought she was getting into her Uber but it turned out to be a family's SUV full of children. It was awful. They were very mad.