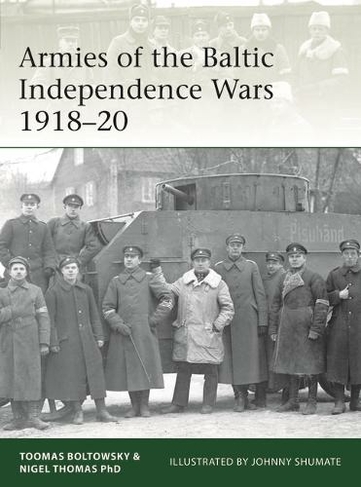 Immediately following the end of World War I, amid the collapse of the German, Austro-Hungarian and Russian Empires, bitter fighting broke out in the Baltic region as Poland, Finland, Estonia, Latvia and Lithuania struggled for their independence, and Red and White Russian armies began their civil war. There were also German forces still active in what had been the northern end of Germany's Eastern Front. This book offers a concise but detailed introduction to this whole theatre of war, focusing on the Estonian, Latvian, Lithuanian and relevant German and Russian forces, plus Finnish, Danish and Swedish contingents. For each region there is a detailed map as well as meticulous orders-of-battle and insignia charts. Detailed for the first time in the English language, this fascinating book concisely tells the story of the birth of these Baltic nation states.

Dr Nigel Thomas is an accomplished linguist and military historian, formerly at Northumbria University, now a freelance military author, translator and military uniform consultant. His interests are 20th-century military and civil uniformed organizations, with a special interest in Germany, Central and Eastern Europe. He was awarded a PhD on the Eastern enlargement of NATO. He lives in Tyne and Wear, UK.Lieutenant Colonel Toomas Boltowsky has been a professional soldier for 25 years, joining the army in 1991 after Estonia regained its independence. He has served in various positions in the Estonian Defence Forces, most recently as Chief of the Arms Control and Verification Centre. A graduate of Tartu University and of the Baltic Defence College, he is currently a lecturer at the latter institution, and is working on several projects focusing on ancient and medieval warfare.Johnny Shumate works as a freelance illustrator living in Nashville, Tennessee. He began his career in 1987 after graduating from Austin Peay State University. Most of his work is rendered in Adobe Photoshop using a Cintiq monitor. His greatest influences are Angus McBride, Don Troiani and Edouard Detaille.