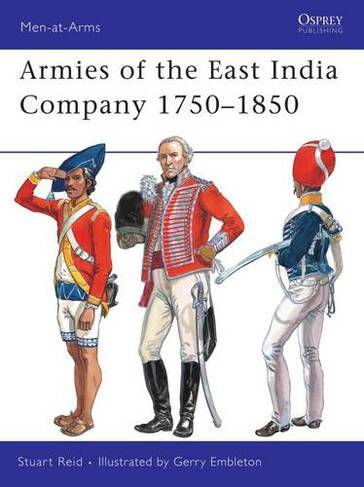 Contrary to popular belief, the capture of India was not accomplished by the British Army, but by the private armies of the East India Company, which grew in size to become larger than that of any European sovereign state. This is the history of this army, examining the many conflicts they fought, their equipment and training, with its regiments of horse, foot and guns, which rivalled those of most European powers. The uniforms, combining traditional Indian and British dress are illustrated in detail and make for a colourful account of a private band of adventurers that successfully captured the jewel of the British Empire. Illustrations (some col.)

Stuart Reid was born in Aberdeen in 1954 and is married with one son. He has worked as a librarian and a professional soldier and his main focus of interest lies in the 18th and 19th centuries. This interest stems from having ancestors who served in the British Army and the East India Company and who fought at Culloden, Bunker Hill and even in the Texas Revolution. His previous works for Osprey include the highly acclaimed titles about King George's Army 1740-93 (Men-at-Arms 285, 289 and 292) and the British Redcoat 1740-1815 (Warriors 19 and 20).