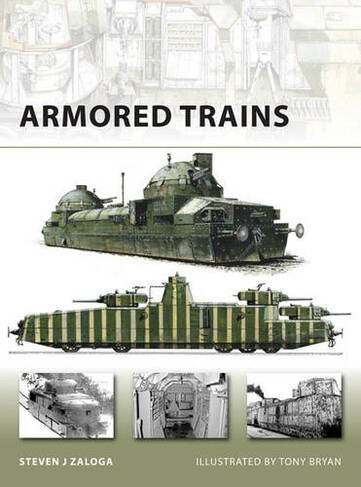 First seen during the American Civil War and later appearing in the Franco-Prussian War and the Boer Wars, the military use of the armoured train only came to the fore during World War I, reigning supreme on the Eastern Front. Deployed widely during Russian Civil War the technology spilt over into the Chinese Civil War, and the subsequent war with Japan, the armoured train has played a major role in conflicts during the 20th century, being used during World War II and surviving to the present day -although more as a technological curiosity than a significant weapon. Steven J Zaloga examines the origins and technical development of armoured trains. But rather than provide an encyclopaedic treatment of the many trains, it instead focuses on the more important and fascinating issue of how armoured trains were actually used in combat. Illustrations (some col.)

Steven J Zaloga was born in 1952. He received his BA in History from Union College and his MA from Columbia University. He has published numerous books and articles dealing with modern military technology, especially armored vehicle development. His main area of interest is military affairs in the former Soviet Union and Eastern Europe in World War II, and he has also written extensively on American armored forces. The author lives in Abingdon, MD.