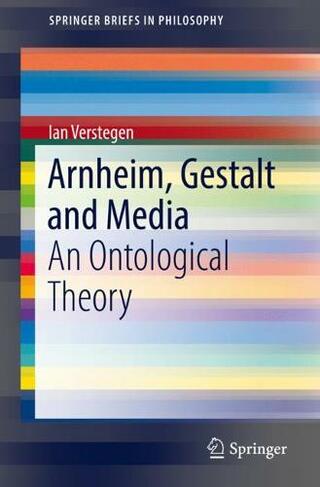 This monograph presents a synthesis and reconstruction of Rudolf Arnheim's theory of media. Combining both Arnheim's well-known writings on film and radio with his later work on the psychology of art, the author presents a coherent approach to the problem of the nature of a medium, space and time, and the differentia between different media. The latent ontological commitments of Arnheim's theories is drawn out by affirming Arnheim's membership in the Brentano school of Austrian philosophy, which allows his theories to be clarified and strengthened, particularly with the metaphysical writings of Roman Ingarden. The resulting theory is relational, portraying essential medial differences with neutral criteria and allowing for a rigorous definition of a medium. The way in which a medium is based on the inherent dispositions of medial materials creates a highly appealing theory that is determinate without being deterministic. The theory is thus highly timely as people in media studies seek to address the determinate nature of media after the post-medium condition. The book will appeal to researchers and graduate students in cultural and media studies as well as architecture and design. 18 Illustrations, black and white; XI, 136 p. 18 illus.

Ian Verstegen is Associate Director of Visual Studies at the University of Pennsylvania. He has published on early modern and modern art history, art historiography, aesthetics and philosophy. He is the author of Arnheim, Gestalt and Art (also with Springer). His most recent book is Federico Barocco and the Oratorians.