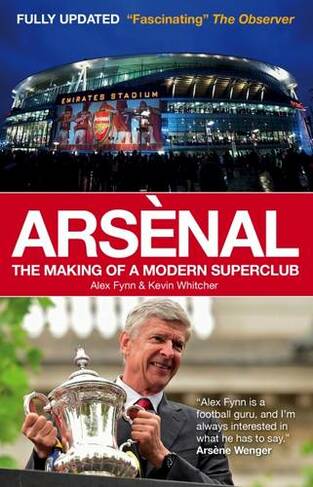 Arsenal: The Making of a Modern Superclub (Revised edition)

Fully updated and expanded reprint of this bestselling, seminal book on Arsenal and Arsene Wenger, with four new chapters to bring it up to date at the start of the 2016/17 season. Described by The Observer as "fascinating" and The Guardian as "shrewd and well-informed", respected football magazine When Saturday Comes said of Arsenal: The Making of a Modern Superclub, "at last a football book that reflects the age". Based on unprecedented access granted to the authors, including exclusive interviews with Arsene Wenger and key Board members, current and former players, Arsenal looks in detail at the club's transformation into a global superpower under the stewardship of their French manager right up to the end of the 2010/11 season.

Alex Fynn is a highly respected author of Arsenal books, including The Glorious Game, Heroes and Villains and The Great Divide as well as numerous titles on the politics of football. Kevin Whitcher is the editor of the highly influential Arsenal fanzine, The Gooner, co-author of The Glorious Game and author of Gunning for the Double - the Story of Arsenal's 1997/98 Season.