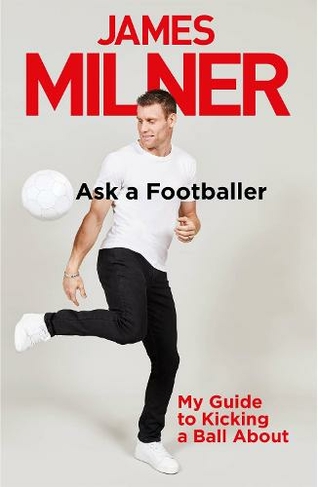 By James Milner (Author)
Hardback
https://www.whsmith.co.uk/products/ask-a-footballer/james-milner/hardback/9781529404944-03-000.html £9.99 rrp £20.00 Save £10.01 (50%)
GBP
Availability
In Stock
Free Delivery Available When You Spend £25 Or More
Details
Spend £25 on eligible products to receive free standard delivery to home or free next working day click and collect to store
Share

'Ask a Footballer is a fine read, showcasing how an unassuming man has forged success, winning the Premier League twice, the FA Cup and the Champions League' Matthew Syed, The Times Ever wondered what it's REALLY like to be a Premier League footballer? My name is James Milner and I'm not a Ribena-holic. Let me share insights into what it's like being a professional footballer, across my different experiences with Leeds United, Newcastle, Aston Villa, Manchester City and now Liverpool (not forgetting a six-match loan spell at Swindon). Plus my highs - and a few too many lows - playing for England. There isn't a current player who's been playing Premier League football as long as I have, and that gives me a pretty rare perspective into how the top-flight game has changed over the past seventeen years. In this book, I explain how a footballer's working week unfolds - what we eat and how we prepare for matches technically, tactically, mentally and physically - and talk you through the ups and downs of a matchday. I reveal my penalty-taking techniques, half-time team talks and the differences between playing against Lionel Messi, Wilfried Zaha and Jimmy Bullard. I've played for managers ranging from Terry Venables, Peter Reid and Sir Bobby Robson to Martin O'Neill, Fabio Capello and Jurgen Klopp. I tell you what it's like sharing a training ground and a dressing-room with team-mates such as Lee Bowyer, Mario Balotelli and Mo Salah. I also reveal the behind-the-scenes work that went into Liverpool's Champions League success - and the celebrations that followed. So this isn't an autobiography. The whole point of Ask A Footballer is that you, the fans, asked me questions and I have used my own experiences to answer them. I hope you like it, and don't find it too boring.

James Milner has played in the Premier League for almost 17 years now, for Leeds United, Newcastle United, Aston Villa, Manchester City and Liverpool. He scored his first goal for Leeds United aged just 16 years and 309 days - a then record. Now 33, he has scored 55 Premiership goals, has more assists than David Beckham and has 61 caps for England.He is regarded as a modern era legend by most football fans, and Jurgen Klopp calls him Millie .