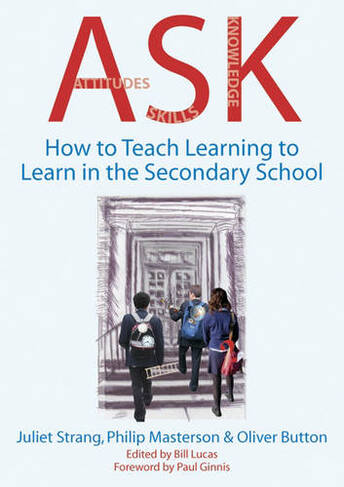 ASK: How to Teach Learning-to-Learn in the Secondary School

Villiers High is one of the first secondary schools in the country to introduce a fully developed curriculum designed so that students can learn how to learn. The results have been remarkable, with year on year improvements in public examination results and an increased student hunger to learn. ASK: How to Teach Learning-to-Learn in the Secondary School is a serious exploration of the new science of learning. Full of tried and tested teaching and learning strategies, this book will transform the way any teacher sees their subject. All of the lesson ideas detailed in this book are easily applied to any curriculum subject and if used across different subjects, quickly become a transferable map which can help students make sense of their learning and progress rapidly at secondary school.

Oliver Button is Deputy Headteacher at Albany school in Enfield and formerly he was Assistant Headteacher at Villiers High School.Paul was one of the UK's oldest-established independent trainers, having started down that path in 1992. He worked in over 4500 primary, secondary and special schools in the UK and in 70 or so international schools in the Middle East, Far East, North and South America, The Caribbean and Europe. He also supported the introduction of a new Junior Cycle curriculum in Ireland. All his ideas were forged at the chalkface but they were inspired by some of the world's leading educational thinkers.First and foremost, Paul was a practitioner (having started his teaching career in 1979), not a researcher or academic. He sought to model the way in which current teaching imperatives and modern learning insights could be translated into workable classroom strategies, and to achieve that with a bit of fun along the way.Even in an aggressive educational world driven by political, inspection and PISA priorities, he believed that it was possible to proceed with integrity, courage and wisdom. To do so, teachers needed a few truths about the learning process to guide their creative planning and a good number of proven strategies to set them on their way. From his books and workshops Paul wanted people to take away teaching ideas that would turn passive pupils into active students and consequently result in deep learning, modern skills, essential dispositions, good progress and great results.Of his many publications, The Teacher's Toolkit is the most well-known, having been reprinted 15 times and translated into Arabic, Indonesian, Hungarian, Slovenian and Spanish. It is one of the UK's bestselling books for teachers and is required reading on most teacher training courses.Paul died suddenly on 30th January 2015. He had three grown-up children and was a Stoke City FC season ticket holder and a self-confessed vinyl junkie. He was also a driver and roadie for The Zombies on their 2009 'Odessey and Oracle' national tour - making his adolescent rock n' roll dream come true! He lived near Stoke-on Trent with his wife Sharon, two cats, one dog and a jukebox.Professor Bill Lucas is Director of the Centre for Real-World Learning. With Guy Claxton he created the Expansive Education Network: a group of teacher researchers who share a common view of the goals of education. These goals are outlined in Bill and Guy's seminal book, Educating Ruby. Bill is also co chair of the new 2021 PISA test of creative thinking, a member of the LEGO Foundation's advisory board and an adviser to Australia's Mitchell Institute.Phil Masterson won the Ealing Pride in Our People Award in 2004 for his contribution to the education of young people in the area.Juliet Strang is Headteacher of Villiers High School, an 11-16 comprehensive school in Southall, West London. She has taught in five schools in different parts of the country, including as Assistant Headteacher at George Abbot School in Surrey and Deputy Headteacher at Cranford Community School in Hounslow before moving to Villiers High School in January 1997.