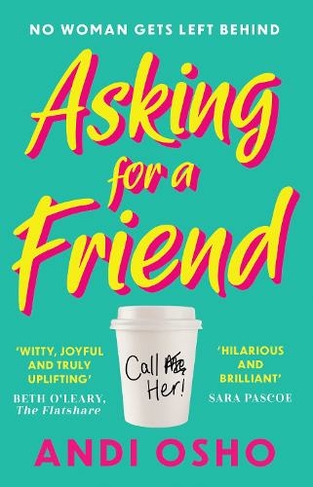 Asking for a Friend

No woman gets left behind Three best friends are going to solve their relationship woes once and for all Forty-something Jemima's life is on track - well, sort of, she just need to bat her niggly ex away for good. Twenty-something Meagan is in the midst of her five-phase plan and is nearly ready for phase three: a relationship. While thirty-something Simi has had more it's not yous than any I dos. These best friends decide it's time to ditch the dating apps and play the love game by their own rules. They're going to ask people out in real life...but only for each other. What could possibly go wrong? Comedian Andi Osho's hilarious and uplifting debut novel features her trademark wit and is perfect for fans of Candice Carty-Williams, Lucy Diamond and Mhairi McFarlane.

Andi Osho is an accomplished writer, actress, film maker and stand-up comedian who has appeared on a number of popular TV comedy shows, such as Mock the Week, Live at the Apollo, Michael McIntyre's Comedy Roadshow, Last Call With Carson Daly and The Late, Late Show. During that time, Andi also wrote, performed and toured two sell-out solo shows, appeared at the O2 Arena in London and Just for Laughs in Montreal. Andi has written for broadcasters such as Fox, BBC and Sky including comedy horror, Twin Thing (Sky Arts) and her own E4 sketch pilot The Andi O Show. As a film maker, her award-winning shorts have screened at film festivals around the world. Asking For A Friend is her debut novel.