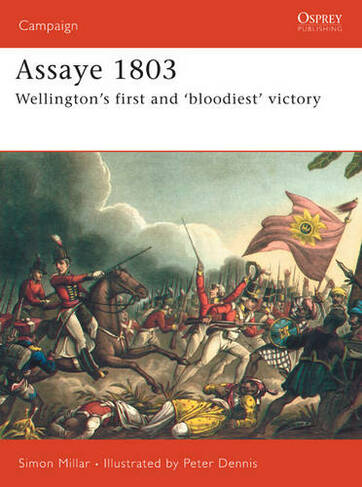 Wellington said that of all, the battle of Assaye from the Second Mahratta War (1803-05) in central India, was 'the bloodiest for the numbers that I ever saw'. The East India Company's army of 19,000 men, under major-general Arthur Wellesley, was sent to put down a rebellion in October 1802 of Mahratta warriors. On 23 September 1803, Wellesley encountered what he had thought to be an infantry force, but which turned out to be the entire army of his opponents in a strong position near to the Kaitna River. This book examines the bitter 3-hour battle, which was won by Wellesley's coolness and inspiring leadership. Illustrations

Simon Millar was born in Malaysia in 1957. He joined the British Army in 1977, and having retired in 1994 subsequently rejoined his regiment, the Irish Guards, in 2001. He has previously written Campaign 91: 'Kolin 1757: Frederick the Great's First Defeat' for Osprey. Simon currently lives in Wiltshire, UK.