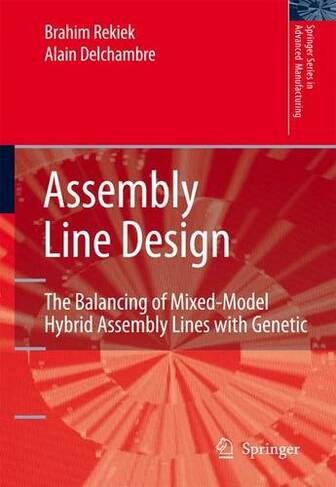 Efficient assembly line design is a problem of considerable industrial importance. Assembly Line Design will be bought by technical personnel working in design, planning and production departments in industry as well as managers in industry who want to learn more about concurrent engineering. This book will also be purchased by researchers and postgraduate students in mechanical, manufacturing or micro-engineering. 20 Tables, black and white; 95 Illustrations, black and white; XVIII, 160 p. 95 illus.

Rekiek Brahim received a license in Physics from the Univetsite Abdel Malek Essaadi, Tetouan and the D.E.S in production and robotics at the Universite Libre de Bruxelles (U.L.B.), Brussels in 1994 and 1996, respectively. He received his Ph.D. degree in Artificial Intelligence in 2000 from the Universite Libre de Bruxelles. Much of his work was carried out in collaboration with industrial companies. From 2001 to 2002, he worked as a member of the Sales Marketing Service at Fabricom Airports Systems, Brussels, Belgium. Since 2002, he has been working as a member of the Projects Management team. He has been an analyst and project manager responsible for the development of the baggage handling systems of many airports. His interests include software architecture, systems design, concurrent engineering, and artificial intelligence.Alain Delchambre obtained his Master and Phd degrees in Mechanical Engineering from the University of Brussels (ULB) in 1983 and 1990 respectively. After three years in industry, he joined a research centre for the Belgian Metalworking Industry (CRIF/WTCM). Since 1994, he has been a Professor at the Faculty of Applied Sciences in ULB and is head of the CADCAM department. He has published three books and more than 80 papers in the areas of concurrent engineering, computer aided design and genetic algorithms.