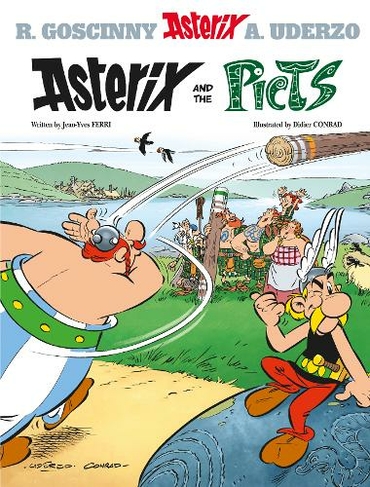 By Jean-Yves Ferri (Author), Didier Conrad (Illustrator)
Paperback
https://www.whsmith.co.uk/products/asterix-asterix-and-the-picts-album-35-asterix/jeanyves-ferri/didier-conrad/paperback/9781444011692-12-000.html £6.55 rrp £7.99 Save £1.44 (18%)
GBP
Availability
In Stock
Free Delivery Available When You Spend £25 Or More
Details
Spend £25 On Products To Receive Free Standard Delivery To Your Home Or Free Next Working Day Click And Collect To Store

When Asterix and Obelix rescue a mysterious Pict named MacAroon, they must journey to Caledonia, now Scotland, to return him to his lady love, Camomilla, the adopted daughter of the old king. However, the treacherous chieftain, MacCabeus, plans to marry her and claim the throne - with the help of the Romans! What with caber-tossing, bagpipes, malted water and an enormous otter in the loch, can the Gauls reunite MacAroon and Camomilla and enjoy some Roman-bashing along the way?

Rene Goscinny was born in Paris in 1926, and spent most of his childhood in Argentina, before eventually moving to Paris in 1951. He died in 1977. Albert Uderzo was born in 1927 in a small village in Marne, France. He met Rene Goscinny in 1951 and on 29 October 1959 their most famous creation, Asterix, made his first appearance on page 20 of Pilote. ASTERIX THE GAUL, their first album, was published in 1961. Jean-Yves Ferri and Didier Conrad began writing and illustrating Asterix in 2013 with ASTERIX AND THE PICTS. There have now been 38 albums.