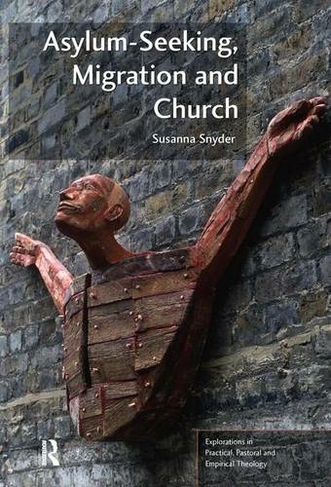 Asylum-Seeking, Migration and Church addresses one of the most pressing issues confronting contemporary society. How are we to engage with migrants? Drawing on studies of church engagement with asylum seekers in the UK and critical immigration and refugee issues in North America, Snyder presents an extended theological reflection on both the issue of asylum-seeking and the fears of established populations surrounding immigration. This book outlines ways in which churches are currently supporting asylum seekers, encouraging closer engagement with people seen as 'other' and more thoughtful responses to newcomers. Creatively exploring biblical and theological traditions surrounding the 'stranger', Snyder argues that as well as practising a vision of inclusive community churches would do well to engage with established population fears. Trends in global migration and the dynamics of fear and hostility surrounding immigration are critically and creatively explored throughout the book. Inviting more complex, nuanced responses to asylum seekers and immigrants, this book offers invaluable insights to those interested in Christian ethics, practical theology, social work, mission and faith and social action, as well as those working in the field of migration.

Susanna Snyder is Assistant Director, Catherine of Siena Virtual College, and Tutor in Theology at the University of Roehampton; previously Assistant Professor at the School of Social Work, University of Texas at Austin, USA. Her interest in immigration and religion began while she was a volunteer with Restore, an organization supporting asylum seekers in Birmingham, and her publications include articles in Journal of Refugee Studies and Studies in Christian Ethics. She holds degrees from the Universities of Cambridge and Birmingham and was a Post-Doctoral Fellow in the Initiative in Religious Practices and Practical Theology at Emory University between 2009 and 2010. Prior to that, between 2005 and 2008, she was a curate in North-East London. She is currently Co-Chair of the Religion and Migration Group at the American Academy of Religion.