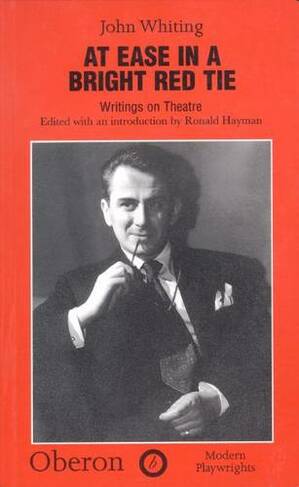 At Ease in a Bright Red Tie

Edited with an introduction by Ronald Hayman This collection of essays and theatre criticism by playwright John Whiting first emerged during the most exciting and eventful decade in post-war twentieth-century British theatre - 1952-1962. Working-class characters were forcefully introduced into mainstream theatre as more than just stereotypes in small roles. Phrases such as 'kitchen sink' and 'angry young man' were coined. The decade also saw the creation of two subsidised companies: the National Theatre and the Royal Shakespeare Company. Includes 'The Art of the Dramatist', a lecture delivered at The Old Vic on 29 September 1957.

John Whiting was born in Salisbury, and studied at RADA. After serving in the Royal Artillery in World War II he resumed his acting career before emerging as a dramatist. Saint's Day (1951) gained recognition for his talent although it was not a popular success. It was followed by A Penny for a Song (1951) and Marching Song (1954). Other works include a dramatization of Aldous Huxley's The Devils of Loudon for the RSC (1961).