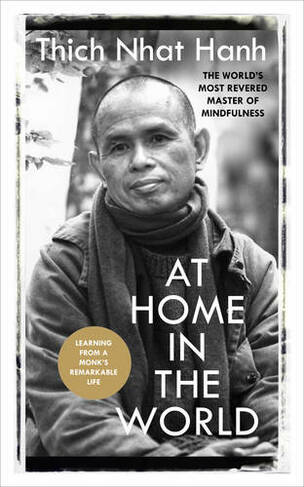 At Home In The World: Stories and Essential Teachings From A Monk's Life

This collection of autobiographical and teaching stories from peace activist and Zen Master Thich Nhat Hanh is thought provoking and inspiring. Collected here for the first time, these stories span his life. There are stories from his childhood and the traditions of rural Vietnam. There are stories from his years as a teenage novice, as a young teacher and writer in war torn Vietnam, and of his travels around the world to teach mindfulness, make pilgrimages to sacred sites and influence world leaders. The tradition of Zen teaching stories goes back at least to the time of the Buddha. Like the Buddha, Thich Nhat Hanh uses story-telling to engage people's interest so he can share important teachings, insights and life lessons.

Thich Nhat Hanh is a Vietnamese Buddhist Zen Master, poet, scholar and peace activist. During the Vietnam War, his work for peace and reconciliation moved Martin Luther King Jr to nominate him for the Nobel Peace Prize in 1967. He founded the Van Hanh Buddhist University in Saigon and the School of Youth for Social Service. He was exiled as a result of his work for peace but continued his activism, rescuing boat people and helping to resettle Vietnamese refugees. He has written many, very popular books, which have sold millions of copies around the world. He now lives in France where he founded the Buddhist community and meditation centre, Plum Village.