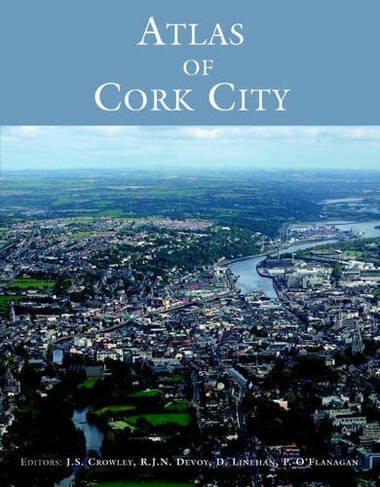 By John Crowley (Author), Robert Devoy (Author), Denis Lineihan (Author)
Hardback
https://www.whsmith.co.uk/products/atlas-of-cork-city/john-crowley/robert-devoy/hardback/9781859183809-01-000.html £50.35 rrp £53.00 Save £2.65 (5%)
GBP
Availability
Currently unavailable. We don't know when or if this item will be back in stock
With Free Saver Delivery
Details
FREE SHIPPING over £20 for Saver Delivery
Share

A unique project, marking Cork's designation as European Capital of Culture in 2005, the Atlas provides the reader with a range of perspectives on the city and its development over time. It is not an atlas in the conventional sense, as it is not solely reliant on maps, though there are many of these, both historical and specially commissioned for the volume. The initial chapters place the city in its environmental setting. Subsequent chapters trace its physical and cultural development over time. With over fifty contributors from a wide range of disciplines offering forty chapters and a fascinating series of case studies, the range is remarkable and the topics covered often surprising. Over 200 maps cover everything from geology, through evolving street patterns, to the distribution of G.A.A. clubs. Given its significant maritime heritage, Cork has been shaped by both external and internal influences, and the cityscape bears the imprint of the various peoples who have lived and settled there. Not one story then, but a myriad of stories, some better known than others, but all contributing to the making and remaking of the city. It has been a city continually in transition and the atlas also provides its readers, and planners with an opportunity to reflect in a more informed way on its future development. col. Illustrations, col. maps, ports. (some col.)