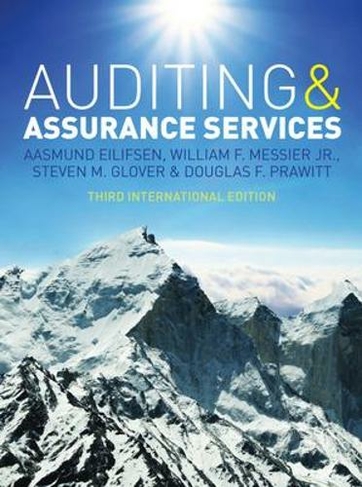 Professor William F. Messier, Jr., is the Deloitte & Touche Professor at the School of Accountancy, Georgia State University. He holds a Professor II position at the Institute for Accounting and Auditing, Norwegian School of Economics and Business Administration, and he is a visiting professor at SDA Bocconi in Milan, Italy. Professor Messier has a BBA from Siena College, an MS from Clarkson University, and an MBA and DBA from Indiana University. He is a CPA in Florida and has taught at the Universities of Florida and Michigan.Professor Messier has served as the Chairperson of the Auditing Section of the American Accounting Association and as co-editor of the Journal of Accounting Literature. He currently serves on the AICPAs International Auditing Standards Subcommittee. Professor Messier has authored or co-authored over 45 articles in accounting, decision science, and computer science journals. Professor Steven M. Glover is the K. Fred Skousen Professor and Associate Dean of the Marriott School of Management, Brigham Young University. Professor Glover is a CPA in Utah and holds a PhD and BS from the University of Washington and an AA in Business from BYU Idaho. He previously worked as an auditor for KPMG LLP and as a director in the national office of PwC LLP. Professor Glover is currently serving on the AICPA Auditing Standards Board and has served on the audit committee of a nonprofit organization. He has served on the board of advisors for technology companies and he actively consults with public companies and public accounting firms. He has also served as an expert witness. Professor Glover is a past President of the Auditing Section of the American Accounting Association and he has been on auditing-related task forces of the AICPA. Professor Glover is or has served on the editorial boards of Auditing: A Journal of Practice & Theory, The Accounting Review, Current Issues in Auditing, and the review board of the AAA/CAQ Access to Audit Personnel Program. He has authored or coauthored over 40 articles and books primarily focused in the areas of auditor decision making, audit education, and audit practice. Together with Professor Prawitt and KPMG, LLP, he co-authored an award-winning monograph designed to accelerate the professional judgment of auditors and auditing students, as well as a monograph on professional skepticism commissioned by the Standards Working Group of the GPPC, an international consortium of the six largest public accounting network firms. Professor Douglas F. Prawitt is the Glen Ardis Professor of Accountancy at the Marriott School of Management, Brigham Young University. Professor Prawitt is a CPA in Utah. He holds a PhD from the University of Arizona, and BS and MAcc degrees from Brigham Young University. Professor Prawitt was awarded the Marriott Schools Teaching Excellence and Outstanding Researcher awards in 1998 and 2000. He received the Merrill J. Bateman Student Choice Teaching Award in 2002, BYUs Wesley P. Lloyd Award for Distinction in Graduate Education in 2006, and the American Accounting Associations Deloitte/Wildman Award in 2013.