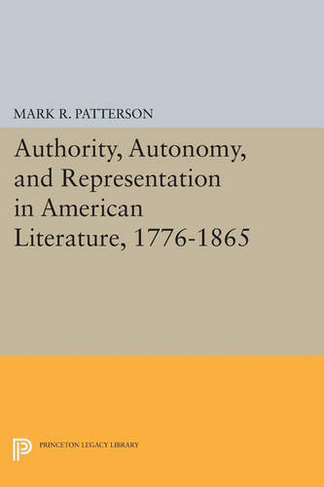 From the Revolutionary War to the Civil War, a familiar scene appears and reappears in American literature: a speaker stands before a crowd of men and women, attempting to mitigate their natural suspicions in order to form a body of federated wills. In this important study of the relationship of literature and politics, Mark Patterson argues that this scene restates political issues in literary terms and embodies the essential problems of American democracy facing both politicians and writers: What is autonomy? How does representation work? Where does true authority lie? Beginning with the debate over ratification of the United States Constitution, Patterson follows out the complex literary consequences of these questions. A work of literary history and criticism, this study also offers valuable insights into matters of political and literary theory. In separate chapters on Benjamin Frankin, Hugh Henry Brackenridge, and Charles Brockden Brown in the post-Revolutionary period and on Fenimore Cooper, Emerson, and Melville in the antebellum period, Patterson provides a series of brilliant readings of major texts in order to describe how American writers have conflated political and literary concerns as a means to their own social authority. Originally published in 1988. The Princeton Legacy Library uses the latest print-on-demand technology to again make available previously out-of-print books from the distinguished backlist of Princeton University Press. These editions preserve the original texts of these important books while presenting them in durable paperback and hardcover editions. The goal of the Princeton Legacy Library is to vastly increase access to the rich scholarly heritage found in the thousands of books published by Princeton University Press since its founding in 1905.