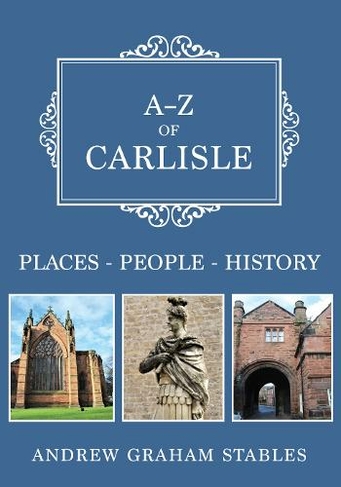 The Cumbrian city of Carlisle has a rich and colourful history. Being so close to the Scottish border, Carlisle became a military stronghold and its surviving eleventh-century castle bears testament to this. During the Industrial Revolution it grew into a major centre of textile manufacture and an important railway hub and has long been key to North Cumbria's industry. The 'Great Border City' remains the main cultural and commercial centre for this part of the country and there are clear reminders of its past everywhere. Author and historian Andrew Graham Stables takes the reader on a fascinating A-Z tour of the city's history, exploring its lesser-known nooks and crannies, and along the way relating many a tale of the most interesting people and places. Fully illustrated with photographs from the past and present, the A-Z of Carlisle will appeal to residents and visitors alike. 100 Illustrations, unspecified

Andrew Graham Stables lives in York but was brought up in Teesdale near to the market town of Barnard Castle. He has written six books for Amberley Publishing exploring the lesser-known histories of several northern towns and cities. He is a keen photographer and contributor to online history groups, and also contributed to the Barnard Castle episode of the History Channel programme 'River Hunters'.