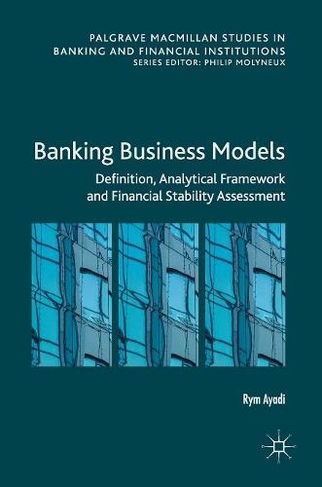 This book is a result of several years of research to provide readers with a novel and comprehensive analysis on business models in banking, essential to understanding bank businesses pre- and post- financial crisis and how they evolve in the financial system. This book will provide depositors, creditors, credit rating agencies, investors, regulators, supervisors, and other market participants with a comprehensive analytical framework and analysis to better understand the nature of risk attached to the bank business models and its contribution to systemic risk throughout the economic cycle. The book will also guide post-graduate students and researchers delving into this topic. 18 Illustrations, black and white; XVIII, 183 p. 18 illus.

Rym Ayadi is Honorary Professor at CASS Business School, Member of the Centre for Banking Research (CBR) at the City University in London, UK, and President of the Euro-Mediterranean Economists Association in Barcelona. She is a member of several high-level expert groups in the European Commission including the Financial Services Users Group (FSUG), an academic member of the European Banking Authority (EBA) Stakeholders Group (BSG), an external advisor to the European Parliament on both the Economic and Financial Committee and Committee on Foreign Affairs, an advisor to the Parliamentary Assembly of the Mediterranean (PAM) and the Union for the Mediterranean (UfM), and an invited expert in international organisations including OECD and IMF, among others.Rym's fields of expertise include international financial systems, financial markets and institutions, global financial regulation and governance, and socio-economic development and foresight in economies in transition. Previously, Rym served as Professor of International Business and Finance at the Department of International Business, Director and Board Member of the Alphonse and Dorimene Desjardins Institute for Cooperatives, and Founding Director of the International Research Centre on Cooperative Finance (IRCCF) at HEC Montreal, Canada, and a Senior Research Fellow and Head of Research of the Financial Institutions Unit at the Centre for European Policy Studies (CEPS), a policy think tank in Brussels.