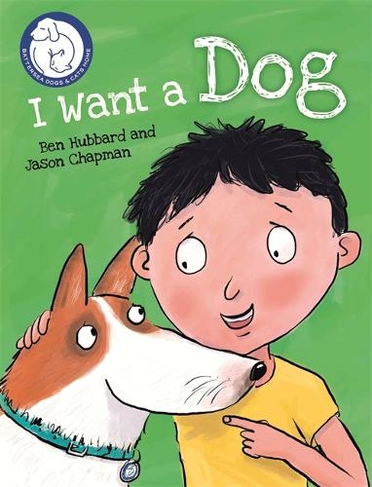 'Jam packed with the information necessary to make an informed decision about getting a dog.' - The School Librarian Learn about looking after dogs with this heart-warming story. Would you really love a dog but don't know the first thing about how it will affect you and your family? This book gives young children aged 6+ all information they and their families need to see if they could take on this big responsibilty. The information is given through the story of Alex who is is desperate to get a dog, but the rest of his family don't think it's a good idea. So Alex decides to start a scrapbook to discover what a dog needs. He finds out about different dog breeds and what they are like. He looks around his home and wonders where the dog will live. He goes out with his friend to walk her dog. He collects photos of different dog breeds and adds labels with their temperaments, how to care for them etc. Alex's family see his enthusiasm and begin to get on board with the idea. Together they visit a puppy from a local family but they also visit a rescue centre and decide to get an adult dog from there. Using Jason Chapman's lively illustrations and Alex's photographic scrapbook, this 'two books in one' describes the behaviour and needs of dogs and how it affects a family's life day-to-day in a charming and fun way. The book is endorsed and checked by Battersea Dogs & Cats Home.

Jason Chapman's great passion is writing and illustrating picture books - several of which have been published worldwide. He has also illustrated for museums and charities including the Natural History Museum, the NSPCC, the National Trust and the National Portrait Gallery and has worked with leading children's TV company Ragdoll Productions developing new characters. A promotional postcard posted to Battersea Dogs & Cats Home in 1990 featuring dogs and cats relaxing in a pub, sparked a working relationship between Jason and the Home that is still strong today. Jason's charming and humorous dogs and cats have appeared on murals, magazines, books, factsheets, education packs, websites, animations, advertising and much more. Ben Hubbard began his writing career at a what's-on newspaper in the 1990s, interviewing bands, actors and artists in his native Wellington, New Zealand. He later joined the fast-paced world of daily newspaper journalism before packing up shop and moving to England. Here, Ben tied a number of new strings to his bow: magazine editor, book editor, and finally, author. Today, Ben writes a mix of non-fiction for all ages - preschoolers through to adults. He has penned titles on an eclectic subject range: from space exploration, samurai warriors and medieval castles; to pop music, pets, tornadoes and rugby skills.