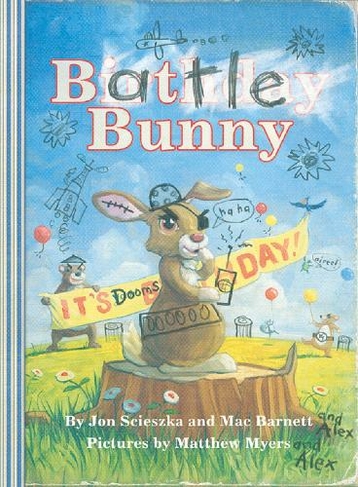 Discover what happens when a young imagination armed only with an HB pencil is pitted against its nemesis, an insipid picture book... When Alex is given a silly, sappy picture book called Birthday Bunny, he picks up a pencil and turns it into something he'd actually like to read: Battle Bunny. An adorable rabbit's journey through the forest becomes a secret mission to unleash an evil plan - a plan that only Alex can stop. Featuring layered, original artwork, this dynamic picture book celebrates children as storytellers.

Mac Barnett is the author of the Brixton Brother series and several picture books, including Guess Again! and Chloe and the Lion (both illustrated by Adam Rex), and The New York Times bestseller Extra Yarn (9781406352481). He's on the board of directors of 826LA, a non-profit writing centre. Mac lives in California. Jon Scieszka was the first National Ambassador for Young People's Literature in the USA. He is the author of some of the best known and funniest books written for children and is the creator of the Trucktown series. Jon is a former school teacher and an avid promoter of literacy. Jon lives with his family in New York.Matthew Myers' career as a children's book illustrator began in 2011 with two starred reviews: Publishers Weekly, which named him a Flying Start, and Kirkus Reviews, which said: "Myers's oil paintings truly amaze." Since then he has illustrated several books, including Bartholomew Biddle and the Very Big Wind and Battle Bunny. Rather than adapting each book to his own style, Myers prefers to adapt his oil painting style to best fit the idea of each book he is working on. He lives and works in North Carolina.