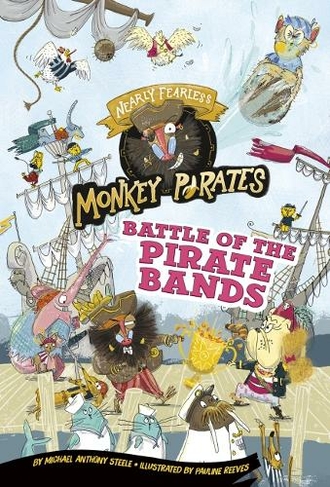 Battle of the Pirate Bands

Pirates from across the seven seas are gathering for the greatest of pirate competitions. But when the prize trophy is stolen, the Monkey Pirates are framed as the theives. Can the crew clear their nearly-fearless names? A glossary, discussion questions and writing prompts round off this exciting adventure story.

Michael Anthony Steele has been in the entertainment industry for twenty-two years. He has worked in many capacities of film and television production from props and special effects all the way up to writing and directing. For the past nineteen years, Mr. Steele has written exclusively for family entertainment. For television and video, he wrote for shows including WISHBONE, Barney & Friends, and Boz, The Green Bear Next Door. He has authored more than one hundred books for various characters and brands including Batman, Green Lantern, Shrek, LEGO City, Spider-Man, Tony Hawk, The Hardy Boys, Garfield, Night at the Museum, and The Penguins of Madagascar. Mr. Steele can be contacted through his website: MichaelAnthonySteele.com Pauline lives by the sea in Exmouth, in southwest England, with her husband, two children, and dog Jenson. She has loved drawing and creating since she was a child, making and drawing all sorts of things. Following her passion, Pauline graduated from Plymouth College of Art with a degree in illustration, and she specializes in children's literature. She takes inspiration from the funny and endearing things animals and people do every day, as well as the superb imaginations that children have. Pauline works both digitally and with traditional materials to create quirky illustrations with humor and charm.