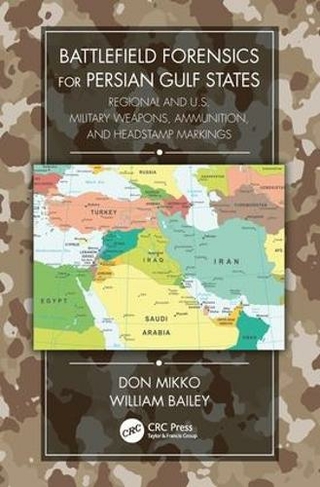 Also available on eBook for £56.99. Click here to purchase from Rakuten Kobo

Battlefield Forensics for Persian Gulf States provides an illustrative reference of various weapons, toolmarks, headstamps, and other traits in order to identify the origins of a variety of guns, casings, and ammunition that can be found in the Middle East. Various conflicts in the region have led to innumerable weapons being used throughout the years. The lead author, Don Mikko, has investigated and examined firearms related items of evidence in countless crime scenes throughout the world. As the Chief of the Firearms Branch at the United States Army Criminal Investigation Laboratory (USACIL), Fort Gillem, Georgia, he recruited, trained, and competency tested military contractors deploying to various combat related areas of the world, those providing forensic firearm and toolmark identification support to local commanders. What was learned was that various foreign weapons and ammunition were being utilized in conflicts and by opposing forces. This book educates readers on the technical data for different types of firearms, ammunition, countries of origin, proof marks, penetrator information and the typical firearm markings imparted on fired cartridge cases, such as breech-face, firing pin, ejector, and extractor markings. Forensics and biometrics within the Persian Gulf have been leveraged since the early 1990s and many of the firearms and types of ammunition covered in this handbook are addressed in an effort to assist those on the ground who are required to be able to identify such items in various scenarios. The information contained within the book has proven to be effective on the battlefield and has helped shape combat operations. This handbook will serve as a useful reference not only to assist military and contractor personnel within the various combat locations but will also prove to be beneficial for law-enforcement, crime laboratory personnel, forensic firearm and toolmark examiners, crime scene investigators, students, practitioners, and civilian personnel throughout the world. 157 Halftones, color; 21 Tables, color

Don Mikko is currently the President of Forensic Firearms Training Seminars, Inc., which provides a variety of forensic services for attorneys, law enforcement agencies, insurance companies, private investigators, military organizations, international organizations, college students and civilian personnel. For more info visit: www.mikkoforensics.com.He's also a retired Chief Warrant Officer who served in the United States Army and spent most of his military career as a Special Agent in the United States Army Criminal Investigation Command (USACIDC). Don has been a Forensic Firearm and Toolmark Examiner since 1990 and has spent twenty-two (22) at the United States Army Crime Laboratory (USACIL), Fort Gillem, GA where he was the Chief of the Firearms Branch. He's also served as the first Laboratory Director at the Atlanta Police Department Forensics Crime Laboratory, Atlanta, GA.He's an ASCLD/Lab Inspector and ISO 17025 Assessor and is certified by his professional organization known as the Association of Firearm and Toolmark Examiners (AFTE) in all three forensic disciplines, which includes firearms, toolmarks and gunshot residues. He has served on several AFTE Committees and is currently a member of the AFTE Certification Committee.He's also an adjunct professor at Southern Crescent Technical College and has instructed forensic and criminal justice courses at Central Texas College, Baumholder, Germany, Clayton State College, Morrow, GA, and Central Piedmont Community College, Charlotte, NC. Don is a graduate of the FBINAA, class # 180th Session (1995). He has a Master's Degree in Business Management from the University of Phoenix, a Bachelor's Degree in Criminal Justice from Chaminade University and an Associate's Degree in Police Science from the University of Hawaii.Don is Post Certified within the State of Georgia for several forensic firearm type courses and is also a member of several professional organizations including AFTE, Internal Association for Identification (IAI), International Ammunition Association (IAA), CID Agents Association (CIDAA), FBI National Academy Association (FBINAA), 50 Caliber Shooters Association, National Rifle Association (NRA) and the Georgia Law Enforcement Firearms Instructor Association (GALEFI). As a Special Agent, he has testified in various military and civilian courts in excess of two hundred cases throughout his professional career. Today, Don spends most of his time re-examining evidence in various criminal and civil type cases and is very engaged in various training assignments for crime laboratories, police departments, military organizations and college students. William Bailey is President of Bailey Firearm Forensics, Inc., which is a forensic training and consulting corporation responsible for providing forensic support to attorneys, law enforcement agencies, insurance companies, private investigators, military organizations and civilian personnel. He is also a forensic firearm and toolmark examiner. Some of his duties include the examination of firearms; the examination of ammunition and ammunition components; the microscopic comparison of questioned bullets, cartridge cases and toolmarks; the restoration of obliterated serial numbers; distance determinations (both gunpowder and shotgun pattern analysis), the examination of security devices such as padlocks and safes and shooting reconstruction.