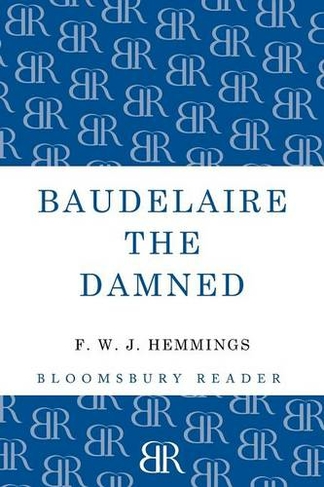 Baudelaire the Damned: A Biography

First published in 1982, this penetrating, immensely readable biography of the brilliant poet, translator, and art critic, F. W. J. Hemmings gives us a fascinating new perspective on Baudelaire's extraordinary, complex personality, his artistic achievements, and his tormented life. Hemmings, the noted biographer of Zola and Alexandre Dumas, has drawn on a great volume of material for this work, much of which came to light as late at the 70s. He shows how Baudelaire's unhappy childhood and the mixture of strong affection and bitter resentment in his feelings for his mother provide the key to his contradictory and self-destructive behavior, particularly in his neurotic relationships with women. Burdened with a sense of guilt and acutely conscious of his shortcomings, Baudelaire was constantly at odds with himself, with those around him, and with the optimistic, materialistic society of his day, which he hated. From the poverty, disease, and despair that plagued him sprang Les Fleurs du Mal, the poetry by which he was to achieve immortality. The struggle to create and publish these poems-which were immediately condemned as pornographic-is vividly described. But Baudelaire was also an art critic whose aesthetic insights are still discussed today, and his book on drug addiction, Les Paradis Artificiels, remains relevant to our time. He introduced Edgar Allan Poe, a writer with whom he strongly identified, to the European public, and he was one of the first Wagnerians in France. Baudelaire the Damned is an important re-examination of all these varied aspects of Baudelaire's life and work, as well as an engrossing portrait of one of the geniuses of world literature.

Frederick William John Hemmings (1920-1997) was born in Southampton. Hemmings did war service decrypting German codes in the Army Intelligence Corps but in 1946 he returned to academic life in Oxford, completing his DPhil in 1949, a groundbreaking study that was published the following year by Oxford University Press, The Russian Novel in France 1884-1914. Hemmings really made his mark as a pioneer of Zola studies and is known as the foremost Zola critic in the English-speaking world. Further studies on Zola and Stendhal unfailingly appeared in later years, as did books on two other major 19th-century French writers: The King of Romance: A Portrait of Alexandre Dumas (1979) and Baudelaire the Damned (1982). This project of Balzacian and Zolaesque proportions was realized all the more remarkably during a busy nine-year term of office as head of the French department at Leicester University. Hemmings was a hugely respected literary scholar and Professor of French Literature, Leicester University 1963-85; twice married (one son, one daughter); died Leicester 9 May 1997.