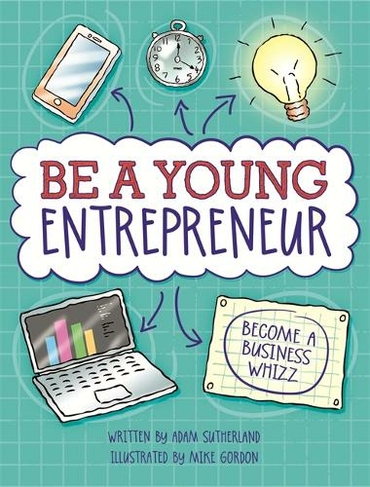 Be A Young Entrepreneur

By Adam Sutherland (Author), Mike Gordon (Illustrator)
Paperback
https://www.whsmith.co.uk/products/be-a-young-entrepreneur/adam-sutherland/mike-gordon/paperback/9780750298353-12-000.html £8.27 rrp £8.99 Save £0.72 (8%)
GBP
Availability
In Stock
Free Delivery Available When You Spend £25 Or More
Details
Spend £25 On Products To Receive Free Standard Delivery To Your Home Or Free Next Working Day Click And Collect To Store
Share

Do you want to be the next Richard Branson? Have you developed the new Angry Birds game? Do you bake the most delicious recipes that people just need to try? Then you need Be A Young Entrepreneur! In this book you will learn all the business advice, practical tips, real-life stories, up-to-date ideas and inspiration you need to make a success of your first business. Starting your own company doesn't have to be boring and this book is all about inspiring you to think creatively about your company, guiding you through every step, from registering your company name to elevator pitches, all stress-free. A great title for project work or leisure reading. Written by award-winning journalist Adam Sutherland and illustrated by the ever-popular award-winner Mike Gordon.

Adam Sutherland is an award-winning journalist and non-fiction writer with over 20 years' experience in the industry. He has written for publications including The Observer, Wired and Esquire magazines, and has won the PPA Specialist Writer of the Year Award for his coverage of sport, and a BSME award for Young Writer of the Year. He started his writing career covering bands and music for style magazines The Face, i-D and Arena, but more recently has expanded to cover film, new media and business. He has written a series of business titles for young adults on companies such as Nike, Google and Facebook, and biographies of rapper Jay-Z and Apple founder Steve Jobs. Mike Gordon is an ever-popular and award-winning cartoonist. He has produced over 500 cards for Hallmark and over 300 picture books for various publishers. His talent has been rewarded with numerous awards inlcuding Berol cartoonist of the year (1988) and runner up for the Trento Fra realto e Follia (1990). He was also nominated for the Silver Quill Award (Germany, 1991) and for the Book and Magazine Illustrator of the Year by the National Cartoonists Society (1995).