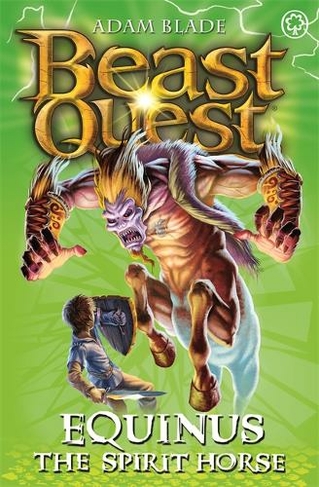 Battle fearsome beasts and fight evil with Tom and Elenna in the bestselling adventure series for boys and girls aged 7 and up. Equinus the Spirit Horse crashes through the forests of the Forbidden Land, stealing the life force of other creatures. Tom must dodge the Ghost Beast's flying hooves and take the fragment of Amulet that Equinus guards - or Tom's father will remain a ghost for ever... There are SIX thrilling adventures to collect in the Beast Quest: The Amulet of Avantia series: Nixa the Death-Bringer; Equinus the Spirit Horse; Rashouk the Cave Troll; Luna the Moon Wolf; Blaze the Ice Dragon; Stealth the Ghost Panther. If you like Beast Quest, check out Adam Blade's other series: Team Hero, Sea Quest and Beast Quest: New Blood!