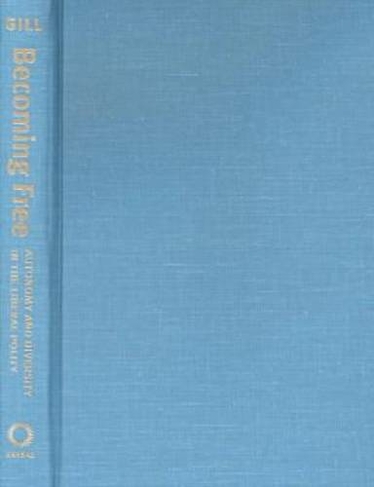 Becoming Free: Autonomy and Diversity in the Liberal Polity

Asethnic, racial, religious, and genderbased groups demand rights to pursue radically diverse lifestyles or maintain their cultural traditions, conflict seems inevitable, even in a free society. Government may offer remedies to social dilemmas - such as affirmative action, curbs on immigration, or protection of gay rights - but these may only fan the flames of resentment. Yet any society that tolerates and protects diversity is more likely to preserve the freedom to live one's life without interference. Emily Gill reexamines the liberal tradition to reconcile its core commitments to autonomy and diversity - values that in theory are complementary but in practice are often at odds - and to show that the interaction of these values determines how we as individuals become free. In Becoming Free, she argues that true freedom is enhanced through the promotion of diversity and the encouragement of rational reflection on the options it allows - and that limited choice or ignorance diminishes such freedom. Yet an incomplete freedom is what many individuals, groups, and states advocate when they commit to particular cultural traditions or religious beliefs, despite the autonomy they themselves enjoy. Gill traces the implications of these conflicting views by drawing on recent scholarship and legal decisions in six areas: national citizenship, cultural membership, ethnicity and gender, religious belief, sexuality, and civic education. By exploring the tensions between autonomy and diversity in such instances as Boy Scouts membership restrictions, gay rights legislation, and education among the Amish, she not only offers an insightful commentary on current issues but also explores the moral foundations of liberal thought. Unlike those who criticize liberalism for its shallow philosophical grounding, Gill shows it to have a substantive moral content grounded in the individual's capacity to make rational decisions based on critical reflection. In her tightly woven arguments, she explores real-world problems in a meaningful way for students and for anyone concerned with the future of liberalism, showing that becoming free is an ongoing process of human and social development.

Emily R. Gill is professor of political science at Bradley University and is a past president of Amintaphil (American Section, International Association for Philosophy of Law and Social Philosophy). Her writings have appeared in such books as Liberalism and Community and Philosophical Dimensions of the Constitution, as well as in Polity, the Journal of Politics, and Political Research Quarterly.