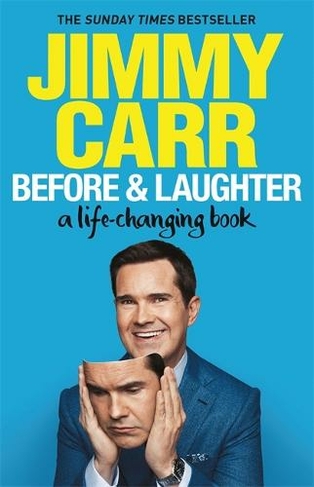 Before & Laughter: The funniest man in the UK's genuinely useful guide to life

In his first autobiography - Before and Laughter - Jimmy Carr closely reflects on his journey to success and happiness, sharing useful and heartfelt advice with the humour that makes him one of the top comedians in the UK.

Cheaper than Scientology, quicker than therapy and much less boring than church - this is the hugely funny and insightful book that anyone feeling stuck in a rut should devour. In his mid-twenties, Jimmy was bored, boring, unfulfilled and underachieving. He wasn't exactly depressed, but he was very sad. Think of a baby owl whose mum has recently died in a windmill accident. He was that sad. This book tells the story of how Jimmy turned it around and got happy, through the redemptive power of dick jokes.

You might be interested in Jimmy's life but he's damn sure you're a lot more interested in your own, Before & Laughter is about both of you. But mainly him. It tells the story of Jimmy's life - the transformation from white-collar corporate drone to fake-toothed donkey-laugh plastic-haired comedy mannequin - while also explaining how to turn your own life around and become the you you've always dreamt of being.

Before & Laughter contains the answers to all the big questions in life, questions like:

And for readers in the West Country: yes, there are pictures (actually, sorry, there are no pictures, but there's a book about a hungry caterpillar you'll love). Because it's Jimmy Carr - recently scientifically proved to be the funniest comedian in the UK - there are jokes, jokes and more jokes throughout. If laughter really was the best medicine, the NHS would be handing out this book in Nightingale Hospitals.

Jimmy Carr is an award-winning comedian, television host and writer, goddamnit. One of the biggest-selling comedy acts in the world, Jimmy consistently does stand-up to sell-out crowds, performing his shows at venues in over forty countries. That's a lot of countries. In fact, the only thing that's been on a more extensive world tour in the last five years, is coronavirus.Before making the move to streaming, Jimmy was one of the bestselling acts in the comedy DVD market, selling over 2 million copies. And to this day his DVDs continue to form the centrepiece of many Oxfam Shop window displays. His last tour, 'Best of Ultimate Gold Greatest Hits', sold over half a million tickets globally with the current show, 'Terribly Funny', looking set to exceed that figure by the end of 2022. Unless someone eats another bat pangolin sandwich.Jimmy is a household name in UK television, well-known for hosting Channel 4's 8 Out Of 10 Cats, 8 Out Of 10 Cats Does Countdown and Big Fat Quiz Of The Year in addition to presenting Comedy Central's Roast Battle UK and Your Face Or Mine. He is a regular on all the top panel shows, including QI and A League Of Their Own, has performed as part of The Royal Variety Performance three times, and a judge on BBC1's I Can See Your Voice. Jimmy's hair has appeared in both The LEGO Movie (2014) and The LEGO Movie 2 (2019).He was also the first UK comedian to sign a stand-up deal with streaming behemoth Netflix in 2015, releasing two specials on the platform, Funny Business (2016) and Best Of Ultimate Gold Greatest Hits (2018). Before & Laughter is his first attempt at an autobiography. He might even write another one. Depending on next year's tax bill.