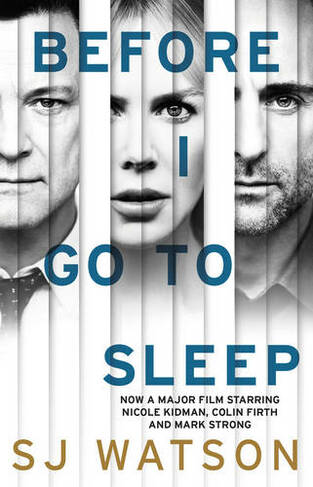 Before I Go To Sleep: (Media tie-in)

'Quite simply the best debut novel I've ever read' Tess Gerritsen Memories define us. So what if you lost yours every time you went to sleep? Your name, your identity, your past, even the people you love - all forgotten overnight. And the one person you trust may only be telling you half the story. Welcome to Christine's life. Now a major film starring Nicole Kidman, Colin Firth and Mark Strong. PRAISE FOR BEFORE I GO TO SLEEP: 'A cracking good thriller' Lionel Shriver 'Thrillers seldom come much better than this. Loved it' Joanne Harris 'So high-concept, so ambitious and so structurally brilliant' Sophie Hannah 'A deeply unsettling debut that asks the most terrifying question - what do you have left when you lose yourself?' Val McDermid 'I loved it from start to finish' Mo Hayder 'Brilliant in its pacing, profound in its central question, suspenseful on every page' Anita Shreve ____________ FINAL CUT, THE UNPUTDOWNABLE NEW THRILLER FROM S. J. WATSON, IS OUT 6TH AUGUST 2020. AVAILABLE TO PRE-ORDER NOW

S. J. Watson's first novel, Before I Go To Sleep, became a phenomenal international success and has now sold over 6,000,000 copies worldwide. It won the Crime Writers' Association Award for Best Debut Novel and the Galaxy National Book Award for Crime Thriller of the Year. The film of the book, starring Nicole Kidman, Colin Firth and Mark Strong, and directed by Rowan Joffe, was released in September 2014. S. J. Watson's second novel, Second Life, a psychological thriller, was published to acclaim in 2015.S. J. Watson was born in the Midlands and now lives in London.