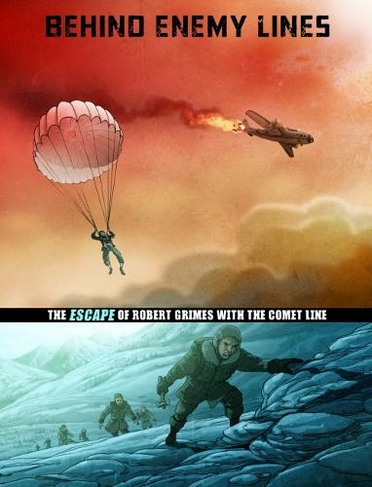 Experience the thrilling and true story of Lt Robert Grimes as he runs for his life to evade being captured by Nazi soldiers. Readers will follow Grimes as he escapes danger with help from the Comet Line, a resistance group that rescued Allied soldiers during WWII.

Matt Chandler is a freelance journalist and former newspaper editor. His newspaper work earned six New York Press Association awards. He has written more than 25 non-fiction books for Capstone Press, and his book, "Side-by-Side Baseball Stars: Comparing Pro Baseball's Greatest Players" was named the 2015 Outstanding Young Adult Book by the American Society of Journalists and Authors (ASJA). Matt lives in New York with his wife Amber and his children Zoey and Oliver. Dante Ginevra's work can be found in numerous publications in his home country of Argentina. These include comics and comic strips in Fierro, Telam, and a variety of other magazines. In addition, he has illustrative work in graphic novels that span the globe. They include Cardal, published in Uruguay, and Entreactos and El Muertero Zabaletta, both published in Spain. Throughout his career he has also participated in numerous exhibitions in Argentina, Italy, Russia, Brazil, France, and Germany.