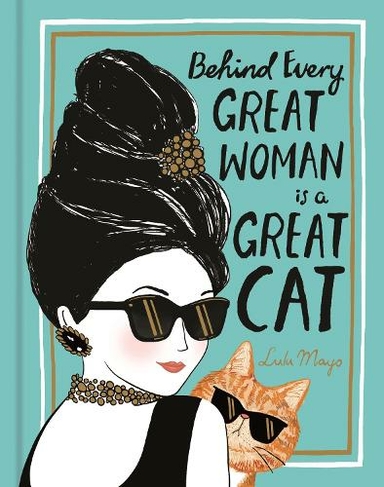 Behind Every Great Woman is a Great Cat

By Lulu Mayo (Author), Justine Solomons-Moat (Author)
Hardback
https://www.whsmith.co.uk/products/behind-every-great-woman-is-a-great-cat/lulu-mayo/hardback/9781912785063-12-000.html £10.65 rrp £12.99 Save £2.34 (18%)
GBP
Availability
In Stock
Free Delivery Available When You Spend £25 Or More
Details
Spend £25 On Products To Receive Free Standard Delivery To Your Home Or Free Next Working Day Click And Collect To Store

Showcasing over 30 inspirational women, including Florence Nightingale (the founder of modern nursing), Georgia O'Keeffe (the artist and mother of American modernism) and Rosa Luxemburg (the theorist and revolutionist), who all have one thing in common - their affection towards cats. The empowering stories of cat-loving women - ranging from artists, pioneers, writers and humanitarians - who dared to change and inspire the world are paired with Lulu Mayo's quirky illustrations. Also featuring 10 things we can learn from cats, a feline flow chart, quotes from famous women who loved their moggies, and much more. The book celebrates the cat as muse, companion, colleague and emotional support as it explodes the myth of a 'cat lady'. Full colour

Lulu Mayo (Author) Lulu Mayo is an award-winning illustrator with an eye for the quirky and idiosyncratic. Her work is energetic and often contains humorous and fantastical elements. She studied for a Master's degree in illustration at the University of the Arts London and has designed greeting cards, posters, editorials, window displays and much more. Lulu is the illustrator behind the best-selling A Million colouring book series, featuring A Million Cats, A Million Dogs, A Million Owls, A Million Bears, A Million Sloths and A Million Unicorns. She is also the creator of Cattitude: Drawing Cats for Creative People, How to Draw a Unicorn and Other Cute Creatures, How to Draw a Mermaid and Other Cute Creatures and How to Draw a Reindeer and Other Christmas Creatures.www.lulumayo.com@lulu_mayo_artJustine Solomons-Moat (Author) Justine was born in Bedfordshire into a family of cat lovers, growing up alongside two tortoiseshells named Moppet and Bow Ring. A keen writer from an early age, she had her first short story published aged 12 years old.Behind Every Great Woman is a Great Cat is her first book. Justine now lives in London with her husband, Adam. Sadly they don't currently have a cat, so Justine makes do with video calling Figaro, a Barcelona-based cat belonging to a friend. In her spare time, Justine enjoys travelling and drinking too much coffee.