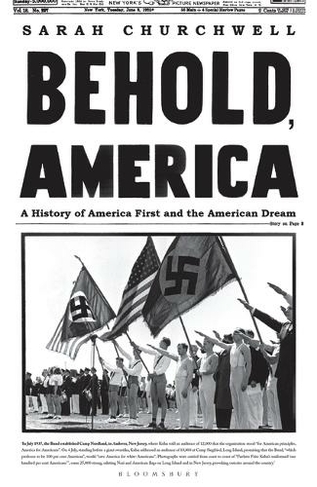 Behold, America A History of America First and the American Dream

By Sarah Churchwell (Author)
Hardback
£13.60 rrp £20.00 Save £6.40 (32%)
GBP
Availability
In Stock
Free Delivery Available When You Spend £25 Or More
Details
Spend £25 On Products To Receive Free Standard Delivery To Your Home

A GUARDIAN AND A SMITHSONIAN BOOK OF THE YEAR A SUNDAY TIMES, OBSERVER AND I-PAPER SUMMER READ 'Enormously entertaining' Sunday Times 'Fascinating' New Statesman 'An enthralling book' Guardian 'The American dream is dead,' Donald Trump said when announcing his candidacy for president in 2015. How would he revive it? By putting 'America First'. The 'American Dream' and 'America First' are two of the most loaded phrases in America today, and also two of the most misunderstood. The American Dream began as a pledge for equality rather than as a dream of supremacy and 'making it big'. America First has not just served as an isolationist term, but as an early slogan of the Ku Klux Klan with surprising links to the present. In 1927, a KKK riot led to the arrest of seven men - among them a certain Fred C. Trump. Both phrases were born nearly a century ago and instantly tangled over capitalism, democracy and race, coming to embody opposing views in the battle to define the soul of the nation. Behold, America recounts the unknown history of these two expressions using the voices that helped shape that debate, from Capitol Hill to the newsroom of the New York Times, students to senators, dreamers to dissenters. As America struggles again to project a shared vision, to itself and to the world, Sarah Churchwell argues that the meanings and history of these terms need to be understood afresh so that the true spirit of America can be reclaimed. Insightful and revelatory, Behold, America overturns everything we thought we knew about the American dream, America First and the battle for the identity of modern America.

Sarah Churchwell is Professor of American Literature and Chair of Public Understanding of the Humanities at the School of Advanced Study, University of London. She is the author of Careless People: Murder, Mayhem and The Invention of The Great Gatsby and The Many Lives of Marilyn Monroe. Her literary journalism has appeared widely in newspapers and she comments regularly on arts, culture, and politics for television and radio. She lives in London.