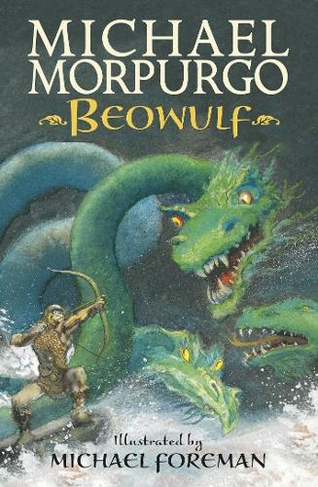 The epic Anglo-Saxon legend is brilliantly recreated by an award-winning author/illustrator team. In fifth-century Denmark, a murderous monster stalks the night, and only the great prince of the Geats has the strength and courage to defeat him. Beowulf's terrifying quest to destroy Grendel, the foul fiend, a hideous sea-hag and a monstrous fire-dragon is the oldest surviving epic in British literature. Artfully retold and magnificently illustrated, this companion volume to Sir Gawain and the Green Knight is made instantly accessible to children by a formidable children's book partnership.

Michael Morpurgo was 2003-2005 Children's Laureate, has written over one hundred books and is the winner of many awards, including the Whitbread Children's Book Award, the Smarties Book Prize, the Blue Peter Award and the Red House Children's Book Award. His books are translated and read around the world and his hugely popular novel War Horse, already a critically acclaimed stage play, is now a successful feature film. Michael and his wife, Clare, founded the charity Farms for City Children and live in Winkleigh, Devon. www.michaelmorpurgo.orgMichael Foreman is one of the world's leading illustrators. He has won several major awards, including the Kate Greenaway Medal, most recently for War Boy. His titles for Walker Books include Sir Gawain and the Green Knight (9781406348880), Why the Animals Came to Town (9781406329957), Mia's Story (9781844282784), Say Hello (9781406307245) and A Child's Garden (9781406312072). He lives in London.