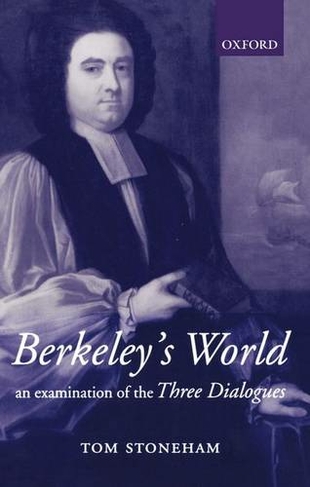 Berkeley's World: An Examination of the Three Dialogues

Tom Stoneham offers a clear and detailed study of Berkeley's metaphysics and epistemology, as presented in his classic work Three Dialogues between Hylas and Philonous, originally published in 1713 and still widely studied today. Stoneham writes for advanced undergraduates, graduate students, and academics in philosophy who are not specialists in the early modern period, and shows that Berkeley is an important and systematic philosopher whose work is still of relevance to philosophers today. Discussion of secondary literature is kept to a minimum (there are no footnotes!) and the interpretation defended shows his arguments as having greater strength and his views as having more plausibility than is usually recognized. Part 1 is a general overview. In Part 2, Berkeley is shown to be a direct realist about perception of the physical world who denies that the objects of either perception or of scientific theory are material. In Part 3, Berkeley's positive views on substance, causation, action, free will, universals, concepts, identity, and persistence are also considered. While Berkeley's immaterialism is criticized, its weaknesses are shown to lie in the details rather than in the big picture, which is no more implausible or unattractive than the materialist alternative.