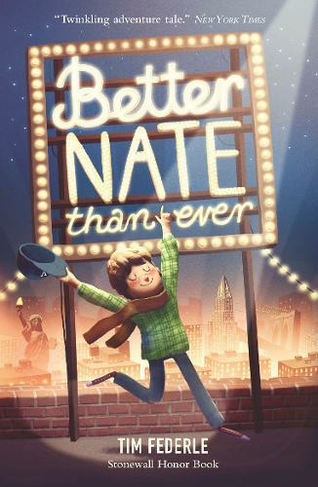 Better Nate Than Ever

Billy Elliot meets Glee! Tim Federle's warm and witty debut is the story of small-town boy Nate as he follows his dreams and learns to be his own best self. "Judy Blume as seen through a Stephen Sondheim lens." Huffington Post Billy Elliot meets Glee! in this award-winning book about a small-town boy with big ambitions. Thirteen-year-old Nate Foster has always wanted to star in a Broadway show. (In fact, he'd settle for seeing a Broadway show.) With best pal Libby's help, Nate plans a daring overnight escape to New York. There's an open casting call for E.T.: The Musical, and Nate knows this could be the difference between small-town blues and big-time stardom. Tim Federle's hilarious and touching debut is full of broken curfews, second chances and the adventure of growing up - because sometimes you have to get four hundred miles from your back garden to finally feel at home.

Tim Federle began crashing New York auditions as a teenager, landing in five Broadway shows, from Gypsy to The Little Mermaid (starring Tim in a catfish costume). Tim has penned columns for Apartment Therapy and Huffington Post, choreographed routines for Sting and James Taylor at Carnegie Hall, and coached the child stars of Billy Elliot on Broadway - Tim's inspiration for his debut novel, Better Nate Than Ever, which was named a Stonewall Honor Book. Tim lives in New York City, USAFind him at TimFederle.com, on Twitter @TimFederle and on YouTube - Tim Federle Reading and many more. #BetterNate