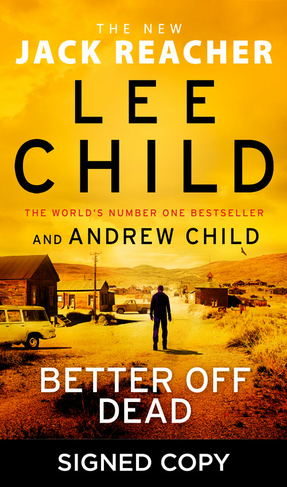 Jack Reacher is back in this breathtaking, brand new thriller from acclaimed #1 bestselling authors Lee Child and Andrew Child. A shattering opening, relentless action, high stakes, and a shadowy host of evil new enemies who are soon going to learn ... they'd be better off dead.

Lee Child is one of the world?s leading thriller writers. He was born in Coventry, raised in Birmingham, and now lives in New York. It is said one of his novels featuring his hero Jack Reacher is sold somewhere in the world every nine seconds. His books consistently achieve the number-one slot on bestseller lists around the world and have sold over one hundred million copies. Lee is the recipient of many awards, most recently Author of the Year at the 2019 British Book Awards. He was appointed CBE in the 2019 Queen's Birthday Honours. Andrew Child is the author of nine thrillers written under the name Andrew Grant. He is the younger brother of Lee Child. Born in Birmingham, he lives in Wyoming with his wife, the novelist Tasha Alexander.