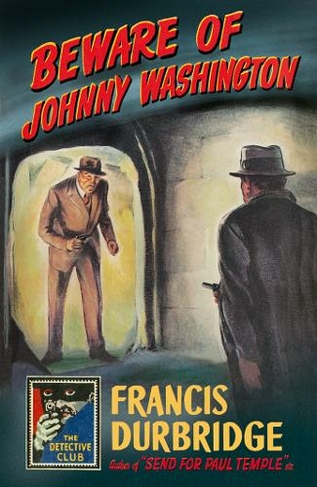 By Francis Durbridge (Author), Melvyn Barnes (Contributor)
Hardback
https://www.whsmith.co.uk/products/beware-of-johnny-washington-based-on-send-for-paul-temple/francis-durbridge/melvin-barnes/hardback/9780008242053-12-000.html £8.19 rrp £9.99 Save £1.80 (18%)
GBP
Availability
In Stock
Free Delivery Available When You Spend £25 Or More
Details
Spend £25 On Products To Receive Free Standard Delivery To Your Home Or Free Next Working Day Click And Collect To Store
Share

Republished for the first time since 1951, Beware of Johnny Washington is Francis Durbridge's clever reworking of the very first Paul Temple radio serial using his new characters, the amiable Johnny Washington and newspaper columnist Verity Glyn. Includes as a bonus the first Paul Temple short story, `A Present for Paul'. When a gang of desperate criminals begins leaving calling cards inscribed `With the Compliments of Johnny Washington', the real Johnny Washington is encouraged by an attractive newspaper columnist to throw in his lot with the police. Johnny, an American `gentleman of leisure' who has settled at a quiet country house in Kent to enjoy the fishing, soon finds himself involved with the mysterious Horatio Quince, a retired schoolmaster who is on the trail of the gang's unscrupulous leader, the elusive `Grey Moose'. Best known for creating Paul Temple for BBC radio in 1938, Francis Durbridge's prolific output of crime and mystery stories, encompassing plays, radio, television, films and books, made him a household name for more than 50 years. A new radio character, `Johnny Washington, Esquire', hit the airwaves in 1949, leading to the publication of this one-off novel in 1951. This Detective Club classic is introduced by writer and bibliographer Melvyn Barnes, author of Francis Durbridge: A Centenary Appreciation, who reveals how Johnny Washington's only literary outing was actually a reworking of Durbridge's own Send for Paul Temple.

Francis Henry Durbridge was born 25th November 1912 in Hull. In 1938, Durbridge created the character Paul Temple, a crime novelist and detective. In addition to the Paul Temple series, Durbridge wrote other mysteries for radio and television. Durbridge also forged a successful career as a writer for the stage with seven plays, and wrote 43 novels, many of which were adapted from his scripts, sometimes with the help of others. Durbridge married Norah Lawley in 1940, they had two sons. He died at his home in Barnes, aged 85 on 11th April 1998.