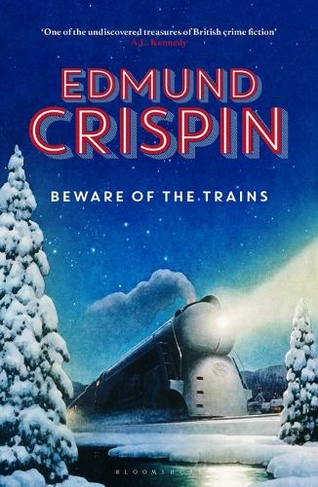 Beware of the Trains

How acute are your powers of perception? Do they begin to match those of Gervase Fen, Oxford don and sleuth supreme? First published in 1953, Beware of the Trains is a collection of sixteen short mysteries. Fen must link a missing train conductor to the murder of a thief, decipher cryptograms to solve the death of a cipher expert and puzzle out a locked-room mystery on Boxing Day. Erudite and complex, these Gervase Fen cases are classic crime at its finest: plot, atmosphere and anecdote, bound together by Edmund Crispin's inimitable wit and charm.

Edmund Crispin was the pseudonym of Robert Bruce Montgomery (usually credited as Bruce Montgomery) (2 October 1921 - 15 September 1978), an English crime writer and composer.Montgomery wrote nine detective novels and two collections of short stories under the pseudonym Edmund Crispin (taken from a character in Michael Innes's Hamlet, Revenge!). The stories feature Oxford don Gervase Fen, who is an eccentric, sometimes absent-minded Professor of English at the university. Crispin's whodunit novels have complex plots and fantastic, somewhat unbelievable solutions. They are written in a humorous, literary and sometimes farcical style and contain frequent references to English literature, poetry, and music. They are also among the few mystery novels to break the fourth wall occasionally and speak directly to the audience.The Times chose Edmund Crispin as one of their '50 Greatest Crime Writers'.

Beware of the Trains
Beware of the Trains
Edmund Crispin
Paperback
Special Order item not currently available. We'll try and order for you
https://www.whsmith.co.uk/products/beware-of-the-trains/edmund-crispin/paperback/9781448217465.html £6.47 rrp £8.99 Save £2.52 (28%)
GBP