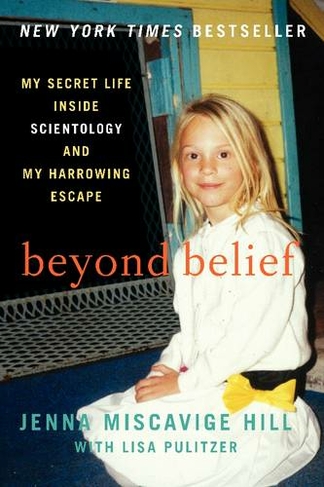 Beyond Belief: My Secret Life Inside Scientology and My Harrowing Escape

Jenna Miscavige Hill was born into the Church of Scientology. The niece of its current director, David Miscavige, she grew up at the center of this highly controversial organization, strictly adhering to its beliefs and practices. But at twenty-two, Jenna made a daring break. Now, for the first time, this insider with unprecedented first-hand knowledge pierces the veil of secrecy that has shrouded this religion that has been the subject of fierce debate and speculation worldwide, speaking out about her life, the organization, and her harrowing escape. In this fast-paced memoir that reads like suspense, Jenna reveals the strange and disturbing details of her childhood, including her disconnection from her parents, and unmasks the inner workings of Scientology's celebrity culture, drawing on her own experiences and those of her husband, a former employee of the famous Scientology Celebrity Centre. From its creation by science fiction writer L. Ron Hubbard in 1952 to its roster of celebrity acolytes, disturbing questions have swirled around the religion and the organization behind it. Jenna sheds light on some of the most troubling issues surrounding the organization: its infamous disconnection policy and the dissolution of families, alleged forced and child labor practices and reports of exploitative fundraising. With her unparalleled insight into the inner world of Scientology's highest order, Hill addresses all this and shares true stories that are beyond the wildest imagination.

Jenna Miscavige Hill was raised as a Scientologist. Since leaving the organization in 2005, she cofounded the website www.exscientologykids.com, which features the stories of current and former Scientologists and supports those who choose to leave the organization. She lives in Southern California. Lisa Pulitzer is a former correspondent for the New York Times andcoauthor of more than a dozen nonfiction titles, including the New York Times bestsellers Stolen Innocence, Imperfect Justice, and Mob Daughter.