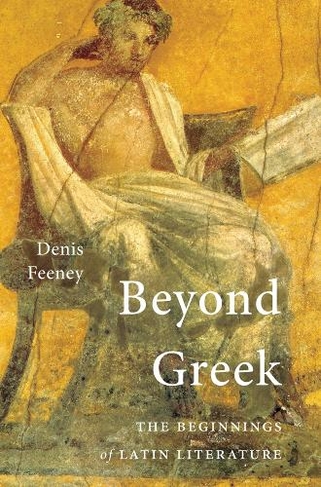 Beyond Greek: The Beginnings of Latin Literature

A History Today Best Book of the Year A Choice Outstanding Academic Title of the Year Virgil, Ovid, Cicero, Horace, and other authors of ancient Rome are so firmly established in the Western canon today that the birth of Latin literature seems inevitable. Yet, Denis Feeney boldly argues, the beginnings of Latin literature were anything but inevitable. The cultural flourishing that in time produced the Aeneid, the Metamorphoses, and other Latin classics was one of the strangest events in history. "Feeney is to be congratulated on his willingness to put Roman literary history in a big comparative context... It is a powerful testimony to the importance of Denis Feeney's work that the old chestnuts of classical literary history-how the Romans got themselves Hellenized, and whether those jack-booted thugs felt anxiously belated or smugly domineering in their appropriation of Greek culture for their own purposes-feel fresh and urgent again." -Emily Wilson, Times Literary Supplement "[Feeney's] bold theme and vigorous writing render Beyond Greek of interest to anyone intrigued by the history and literature of the classical world." -The Economist

Denis Feeney is Giger Professor of Latin at Princeton University.