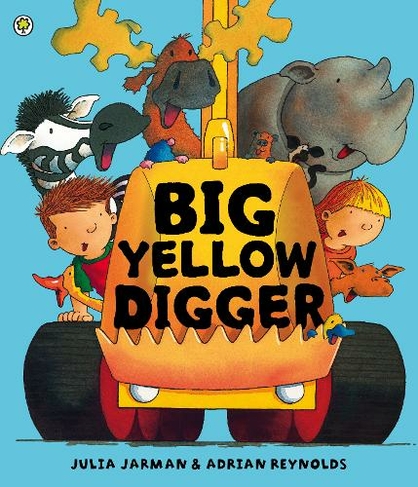 Ben and Bella are off on another adventure and, of course, all the animals want to join them! The destination this time is Australia, and the digger digs and judders, as Moose, Zebra, Rhinoceros, Mole and lots of other animals all clamber on. Even Little Roo jumps up, and gets delivered safely back to his his mummy. Everyone stops for a barbie, a dance with the digeridoo, and then it's time to head for home again. Join the fun on an adventure that gets better and better!

Adrian Reynolds is one of today's most popular children's illustrators. After studying illustration at Anglia Ruskin University, he went on to illustrate the popular Pete and Polo series for Orchard. Adrian is now known for his lively and fun illustrations like those in the fantastic Big Red Bath and the bestselling Harry and the Bucketful of Dinosaurs. Adrian lives in Cambridge. Julia Jarman has won the Stockport Schools' Book Award twice for her picture book texts. After studying English and Drama at Manchester University, she became a teacher. Julia has been writing for over fifteen years, and in that time has created ten novels and over seventy shorter books. Initially, she was encouraged to write by her three children who asked for 'real characters like us'. Recently, she has become a grandmother, inspiring her to write picture books. Julia lives in an English village near Bedford.