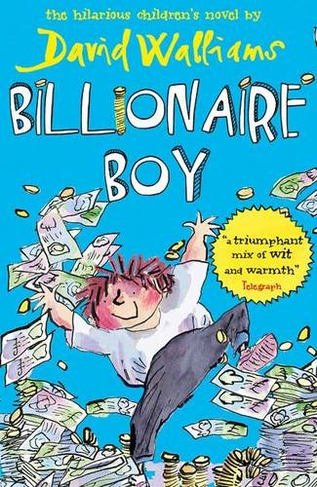 A hilarious, touching and extraordinary new fable from David Walliams, number one bestseller and one of the fastest growing children's author across the globe. Joe has a lot of reasons to be happy. About a billion of them, in fact. You see, Joe's rich. Really, really rich. Joe's got his own bowling alley, his own cinema, even his own butler who is also an orangutan. He's the wealthiest twelve-year-old in the land. Yes, Joe has absolutely everything he could possibly want. But there's just one thing he really needs: a friend...

David Walliams has revolutionised reading for children and become one of the most influential children's writers today. Since the publication of his ground-breaking first novel, The Boy in the Dress(2008), Walliams has seen unprecedented growth with global sales exceeding 40 million copies, and his books translated into 53 languages. Born in London, Tony Ross went to art school in Liverpool. His cartoons have appeared in famous publications the world over. His first book, Hugo and the Wicked Winter, was published in 1972. Tony has since written over 100 books and illustrated over 2000! David and Tony have worked on seven bestselling picture books together, and thirteen of David's phenomenally successful children's novels. David and Tony also collaborated on the 2017 World Book Day title, BLOB, and on the blockbuster collections The World's Worst Children 1, 2 and 3, The World's Worst Teachersand The World's Worst Parents.