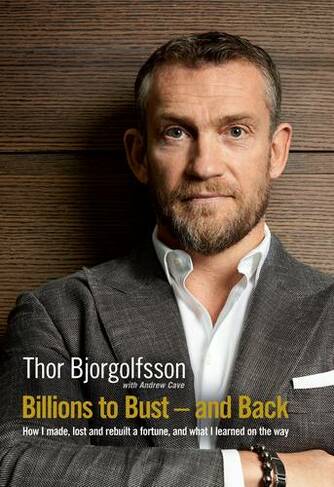 Billions to Bust and Back: How I made, lost and rebuilt a fortune, and what I learned on the way (Main)

Also available on eBook for £11.39. Click here to purchase from Rakuten Kobo

Thor Bjorgolfsson is a self-styled adventure capitalist with an addiction to debt and an insatiable appetite for business deals who became Iceland's first billionaire. After 10 years establishing his financial empire with alco-pops and beer in the lawless 'Wild East' of newly-capitalist Russia in the 1990s, he moved on to merging, floating, spinning off and privatising businesses from Finland to Sweden, Poland, Bulgaria, Serbia, Greece and the Czech Republic. On his 40th birthday, and worth $3.5 billion, he was sitting on top of the world; only 250 people in it were richer than him. His most spectacular triumph was the takeover of Iceland's second-largest bank, Landsbanki - he had expected his investment's value to double or treble in four years, and instead it rose ten-fold. But when financial meltdown hit Iceland in October 2008, Landsbanki crashed and burned, taking Bjorgolfsson with it. Within 12 months he had lost 3.3 billion euros - 98.5% of his wealth - and was treated as a scapegoat in his native country for supposedly bringing about the disaster. Faced with appalling debts, Bjorgolfsson has made good on his promises to repay his creditors, and at the age of 47 is now a billionaire once again.

Thor Bjorgolfsson is a self-styled 'adventure capitalist' and was Iceland's first billionaire. Born in 1967, his earliest business deal was persuading his father to lend him $80 to buy vintage Marvel and X-Men comics, an investment that he still holds. He made his first $100 million in 2002, from the sale of his Russian Bravo brewery business to Heineken. At the age of 40, Forbes magazine estimated his wealth at $3.4 billion and featured him on its cover.