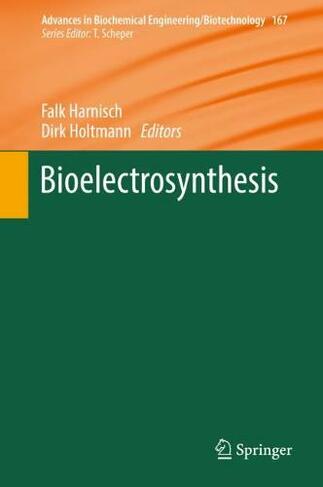 This volume discusses both the latest experimental research in bioelectrosynthesis and current applications. Beginning with an introduction into the "electrification of biotechnology" as well as the underlying fundamentals, the volume then discusses a wide range of topics based on the interfacing of biotechnological and electrochemical reaction steps. It includes contributions on the different aspects of bioelectrochemical applications for synthesis purposes, i.e. the production of fine and platform chemicals based on enzymatically or microbially catalyzed reactions driven by electric energy. The volume finishes with a summary and outlook chapter which gives an overview of the current status of the field and future perspectives. Edited by experts in the field, and authored by a wide range of international researchers, this volume assesses how research from today's lab bench can be developed into industrial applications, and is of interest to researchers in academia and industry. 30 Tables, color; IX, 420 p.

Falk Harnisch is group leader at the Helmholtz-Centre for Environmental Research - UFZ in Leipzig (Germany) since 2012. He earned his PhD (2009) and a Diploma (2006) from the University of Greifswald (Germany) and his Habilitation (2016) from the University of Leipzig. He has received numerous awards and scholarships, most recently the Research-Award "Biotechnology 2020+" by the German Federal Ministry of Education and Research (2012), and Research Award of the Helmholtz-Centre for Environmental Research - UFZ (2015). Prior to his current post he was PostDoc and Senior Researcher at the TU Braunschweig (Germany) and Visiting Academic at The University of Queensland (Australia). He has now been working at the interface of microbiology and electrochemistry for over a decade. His research interests cover the fields of microbial electrochemistry and microbial electrochemical technologies, electrochemistry for energy conversion and storage, especially electroorganic chemistry.Dirk Holtmann was born in Bremen, Germany and completed his diploma in chemical engineering/biotechnology in 1999. He obtained his PhD at the Otto von Guericke University of Magdeburg on the electrochemical measurement of the microbial activities in fermentations. He is now group leader of the biochemical engineering group at the DECHEMA Research Institute in Frankfurt, Germany. The research focuses on the combination of different disciplines such as bio-, electro- and chemo-catalysis, molecular biology and process engineering to develop novel production routes. His current research activities concentrate on biocatalysis and biotransformations, the development and evaluation of electro-enzymatic processes as well as microbial electrosynthesis.