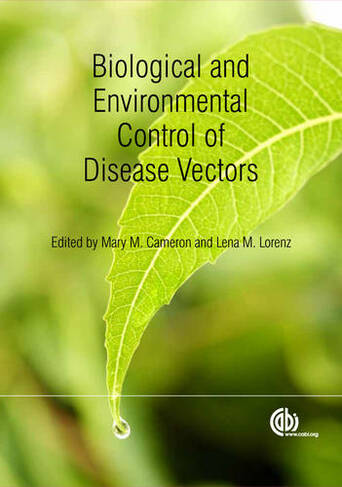 Covering the theory and practice of non-insecticidal control of insect vectors of human disease, this book provides an overview of methods including the use of botanical biocides and insect-derived semiochemicals, with an overall focus on integrated vector management strategies. While the mainstay of malaria control programmes relies on pesticides, there is a resurgence in the research and utilisation of non-insecticidal control measures due to concerns over rapid development and spread of insecticide resistance, and long-term environmental impacts. This book provides examples of successful applications in the field and recommendations for future use.

Mary Cameron obtained a BSC in Zoology from Bedford College, University of London, in 1983, and a PhD in Entomology in 1987. She originally joined the Department of Entomology at LSHTM in 1984, to study oviposition behaviour in mosquitoes, but later left to take up a post-doc position at the University of Oxford in 1990. After field work on sandfly biology in Peru, and her appointment at the Liverpool School of Tropical Medicine as a Research Fellow, Mary re-joined LSHTM in 1995 to conduct laboratory and clinical trials to reduce house dust mite allergens in homes. She was appointed Lecturer in 1998, and Senior Lecturer in 2007, and her main areas of research focus on novel trapping methods for surveillance and control of a range of medically important arthropods. obtained a BSc in Zoology from the University of Bristol in 2006 and a PhD in evolutionary ecology with Prof Jacob Koella at Silwood Park Campus, Imperial College London in 2010. She incorporated evolutionary and epidemiological principles into the study of host-parasite relationships between mosquitoes and microsporidian parasites in laboratory experiments. She subsequently gained some field experience working on studies testing mosquito attractants and repellents at Ifakara Health Institute in Tanzania before starting her post-doctoral fellowship with Dr Sarah Moore at LSHTM in 2011.