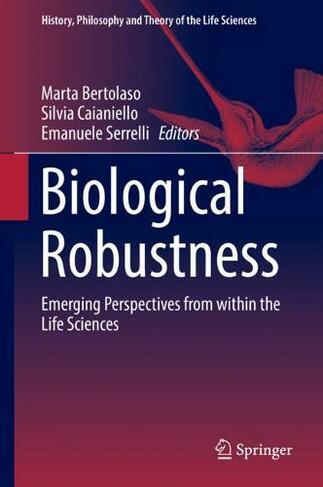 This volume reviews examples and notions of robustness at several levels of biological organization. It tackles many philosophical and conceptual issues and casts an outlook on the future challenges of robustness studies in the context of a practice-oriented philosophy of science. The focus of discussion is on concrete case studies. These highlight the necessity of a level-dependent description of robust biological behaviors.Experts from the neurosciences, biochemistry, ecology, biology, and the history and the philosophy of life sciences provide a multiplex perspective on the topic. Contributions span from protein folding, to cell-level robustness, to organismal and developmental robustness, to sensorimotor systems, up to the robustness of ecological systems.Several chapters detail neurobiological case-studies. The brain, the poster child of plasticity in biology, offers multiple examples of robustness. Neurobiology explores the importance of temporal organization and multiscalarity in making this robustness-with-plasticity possible. The discussion also includes structures well beyond the brain, such as muscles and the complex feedback loops involved in the peculiar robustness of music perception. Overall, the volume grounds general reflections upon concrete case studies, opening to all the life sciences but also to non-biological and bio-inspired fields such as post-modern engineering. It will appeal to researchers, students, as well as non-expert readers. 15 Illustrations, color; 11 Illustrations, black and white; X, 258 p. 26 illus., 15 illus. in color.

Marta Bertolaso is Assistant Professor for Philosophy of Science at the University Campus Bio-Medico of Rome, Faculty of Engineering, and member of FAST Institute of Philosophy of Scientific Practice at the same university. Her research concerns philosophy of science and philosophy of the life sciences with a specific focus on the dynamics of complex systems, on cancer and on the philosophical implications of the theoretical models that have been proposed to account for its occurrence. She is currently exploring the relationships between contingency, hierarchy and causal complexity in dynamic, engineered and living systems, drawing lessons for the modeling and epistemology of new bio-medical fields such as 'In Silico Medicine'. In particular, her interest deals with how features of organizational levels are structured and identified in scientific practice. She is coordinator of Bio-Techno-Practice, a Research Empowering Hub, and editor-in-chief of the book series Human Perspectives in Bio-Medical Sciences and Technology (Springer). Silvia Caianiello is Senior Researcher at the Institute for the History of Philosophy and Science in the Modern Age (ISPF) of the Italian National Research Council (C.N.R.) in Naples, Italy. Her current research field is the history and philosophy of evolutionary theory and evo-devo, with particular focus on the breakthrough of systemic and hierarchical approaches to biological organization and evolutionary change. She conducted extensive research on conceptual transfers across different scientific fields and their wider epistemic implications, and particularly on the dynamics of conceptual interactions between Human and Life Sciences in the XIX Century. She is co-editor of the Book Series "Filosofia e saperi. Crossing boundaries between humanities and life sciences" (CNR Edizioni) and Vice-Director of the Italian inter-university Center on epistemology and history of the life sciences "Res viva". Emanuele Serrelli is a researcher in the philosophy of science, specialized in philosophy of biology and evolutionary theory but vocated to interdisciplinary projects that span the whole range of disciplines and fields of knowledge. Currently fellow at the University of Milano-Bicocca, Italy, CISEPS Center for Interdisciplinary Studies in Economics, Psychology and Social Sciences, he also works as a freelance research consultant for several universities around the world. He is a member of the editorial board at Frontiers in Ecology and Evolution: Evolutionary Developmental Biology. His recent international works include "Evolutionary Theory: A Hierarchical perspective" (edited with N. Eldredge et al., University of Chicago Press, 2016), "Understanding Cultural Traits. A Multidisciplinary Perspective on Cultural Diversity" (edited with F. Panebianco, Springer, 2016), and "Macroevolution: Explanation, Interpretation and Evidence" (edited with N. Gontier, Springer, 2015).