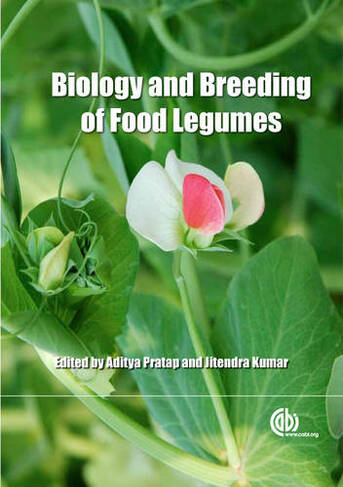 Biology and Breeding of Food Legumes

Food legumes are important constituents of human and animal nutrition, supplying high quality proteins crucial for a balanced diet. These crops also play an important role in low-input agricultural production systems by fixing atmospheric nitrogen. Despite systematic and continuous breeding efforts by legume researchers all over the world, substantial genetic gains have not been achieved. These issues require immediate attention, and overall, a paradigm shift is needed in breeding strategies to strengthen our traditional crop improvement programs. To this end, Biology and Breeding of Food Legumes provides extensive information on their history, origin, evolution and botany, as well as breeding objectives and procedures, nutritional improvement, industrial uses, post-harvest technology and recent developments made through biotechnological intervention.

Dr. Aditya Pratap, born on October 18, 1976, is currently working as Senior Scientist (Plant Breeding) in the Crop Improvement Division, Indian Institute of Pulses Research, Kanpur. He obtained his Master's and Ph.D. degrees in Plant Breeding and Genetics from CSK Himachal Pradesh Agricultural University, Palampur, INDIA in 1999 and 2003. Holding a brilliant academic and service record, he has been associated with crop research since last eight years. He has worked on genetic improvement of crop plants including wheat, triticale, rapeseed-mustard, chickpea and Vigna species and has been instrumental in development of haploidy breeding protocol in cereals through chromosome elimination technique. He has been associated with the development and release of five crop varieties including two in rapeseed-mustard (RSPT-2 and RSPR03), two in green gram (IPM 02-14 and IPM 02-3) and one in facultative winter wheat (DH 114) besides being instrumental in establishing prebreeding garden of rapeseed-mustard at SKUAST-Jammu and of pulses at IIPR, Kanpur. Presently, he is working on genetic improvement of green gram (Vigna radiata) through distant hybridization aided by conventional and biotechnological tools. His research interests include distant hybridization, doubled haploidy breeding, plant tissue culture, and molecular breeding. To his credit, he has about 60 publications which include research papers published in high impact Indian and foreign Journals as well as reviews/chapters for best international publishers including Springer, Academic Press and CRC. His Ph.D. thesis has been published in the form of a book entitled, "Haploidy breeding in Triticale and triticale x wheat hybrids: Comparison of Anther Culture and Chromosome Elimination Techniques" by Lambert Academic Publishing, Germany. Recently, he has been awarded prestigious Norman E. Borlaug International Agricultural Science and Technology Fellowship, 2010. He is an acknowledged speaker and has several awards to his credit. Dr. Jitendra Kumar, born in 1973, is presently working as Senior Scientist in the Division of Crop Improvement at Indian Institute of Pluses research, Kanpur. He has an excellent research career throughout. He secured Gold Medal during masters programme and pursued his Ph.D. in Genetics & Plant Breeding from G. B. Pant University of Agriculture & Technology, Pantnagar, India. He was awarded CSIR-Research Associateship during 2003-2005 for postdoctoral studies at the Institute of Integrative Medicine, Jammu (India). During this period, he undertook study tours in Austria and Syria. His research interests include conventional and molecular breeding, QTL analysis and marker assisted selection for crop improvement. He has about 30 research papers in journals of international repute besides several reviews, book chapters and popular articles. His current priorities include lentil breeding using both conventional and molecular approaches. His efforts have led to the identification of 2 lentil varieties and several others are in pipeline.