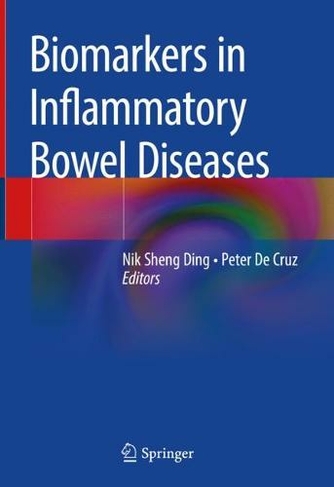 This book provides a comprehensive and complete overview of biomarkers in clinical practice for inflammatory bowel disease (IBD) bringing together the literature in a clear and concise manner. The book bridges the gap between growing knowledge at the bench and current and future applications of biomarkers in clinical practice. The central structure of the book focuses on prognostic and predictive biomarkers in IBD with an emphasis on the fields of research and scientific techniques (genomics, proteomics and metabonomics) that have led to biomarker discovery and places these biomarkers within a clinical context to help understand their utility in clinical practice. This book will be of use to clinicians who have an interest in using biomarkers in clinical practice as well as clinician researchers and scientists involved in the biomarker research pipeline. The author team comprises experts from around the world in order to bring together the literature in an effort to inform clinicians and researchers about the current state-of-the art in biomarker discovery. It is intended to assist future research efforts and indicate how biomarkers might be best applied to clinical practice both at present and in the future. 100 Tables, color; 30 Illustrations, color; 5 Illustrations, black and white; XVII, 365 p. 35 illus., 30 illus. in color.

The editors are currently reviewers of major international journals. They are experts in inflammatory bowel disease (IBD) each with an interest in developing biomarkers for research development and improving patient care. The editors have also developed strong reputations within the international IBD community and have connections with each of the nominated chapter contributors. Nik Sheng Ding is a committee member for the European Crohn's and Colitis Organisation (ECCO) and a clinical lecturer at Imperial College, London. He has supervised students and is a member of the Computational Medicine division of the department of medicine. He is completing a PhD entitled "Clinical and metabolic predictors of response to anti-TNF therapy in Crohn's disease". He has authored and co-authored manuscripts, book chapters and has a major grant from ECCO to conduct his research. He is currently the principal investigator of an international study into access to IBD investigations (biomarkers) by health professionals, particularly investigating rates of usage according to health expenditure and quality of care for patients (Access to IBD investigations - ACCID). Nik has an interest in translational research with investigating the function of the microbiome through metabonomics and it's relation to outcomes in IBD. Peter De Cruz MBBS, Ph.D, FRACP Peter De Cruz is Director of the IBD service at the Austin Hospital, Senior lecturer at the University of Melbourne and Life Fellow of Clare Hall at the University of Cambridge. Peter's doctoral research at The University of Melbourne identified the optimal strategy for preventing Crohn's disease recurrence after resectional surgery. The findings of the research have been published in the Lancet and Gastroenterology and have changed practice internationally. His postdoctoral fellowship in complex IBD and clinical nutrition was undertaken between Addenbrooke's Hospital, Cambridge and St Mark's Hospital, London. Peter's ongoing clinical research interests include identifying predictors of response to IBD therapeutics which he maintains through his translational research interest in molecular microbiology and immunology.